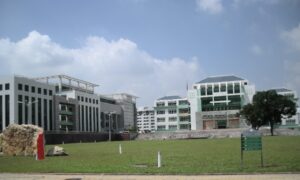 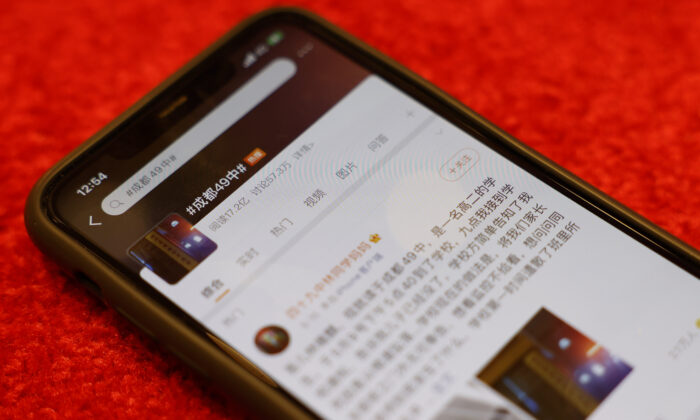 A Weibo page about the death of a student in Chengdu with 1.72 billion views is displayed on a mobile phone in Beijing, China, on May 13, 2021. (Ng Han Guan/AP Photo)
China Human Rights

TAIPEI, Taiwan—It was a call no parent wants to receive. On Mother’s Day, around 9 p.m., a woman in Chengdu in southwestern China was told that her son, who she had dropped off at school just hours ago, had died.

Distraught, she went to Chengdu No. 49 Middle School immediately, but was not allowed to even enter the school grounds, she wrote in a series of Twitter-like Weibo posts on the next day that were shared hundreds of thousands of times this week.

Her account, disputing both the police and local government’s account of her 16-year-old son’s death, has touched a nerve, becoming one of the most discussed topics on Chinese social media this week. One related hashtag #ChengduNo.49Middle# racked up more than 1.5 billion views alone on Weibo. People online called for justice for the mother and questioned the actions of the school, police, and local authorities.

By May 9 evening, videos of a protest in front of the school circulated. People, clutching white flowers, shouted “the truth!” again and again. The Associated Press could not independently confirm the veracity of the videos.

The incident reflected the frustration of many Chinese who, in trying to seek justice, are met with local authorities’ deflecting blame and responsibility. Many called on tightly-controlled national media to report on the matter or advised the woman to seek intervention from central authorities in Beijing.

A spokesperson for the school, which serves both middle and high school students, said in a statement on May 10 that the student had fallen at around 6:40 p.m. on May 9, and that it was investigating and cooperating with the police. The local branch of the education department in Chenghua district in Chengdu said in a statement May 11 that the incident was a suicide.

Police issued a statement May 11 saying they were investigating the death of a 16-year-old student at the No. 49 Middle School, and that they had excluded any criminal involvement. “The family has no objection,” the statement read. “We urge the public to not believe rumors and not transmit rumors.”

But rumors continued to swirl as people demanded more information.

Many wondered on the mother’s Weibo timeline if she had been silenced by authorities, pointing out that she had changed her username shortly after the posts spread widely and that the cellphone model, which is automatically recorded on each post, also changed.

Other users questioned why there was a gap of roughly two hours between the school’s statement of the student’s time of death and when the mother claimed she was told of the news. Why did the school take two hours to notify her of her son’s death? Why could she not see his body on the same day?

Others simply repeated the line from the police statement, “the family has no objection.”

On May 13, China’s official Xinhua News Agency published a report saying that the mother had met with the school on the night of the phone call, but that they had met at the local police department so as to not disturb other students. The school’s director of safety said it took two hours to notify the family because they could not identify the student at first due to the severity of injuries to his head.

State broadcaster CCTV carried a live report from the school and surveillance footage of the student’s fall seen through his shadow passing through trees.

The mother, who did not reveal her full name online, did not respond to multiple phone calls. A staffer for the school declined to comment saying they had not received directions to speak to media. A police officer at the Chenghua district station directed the AP to the stations’ political department, which did not respond to phone calls.

On May 11, a large crowd gathered in front of the school, said the owner of a restaurant across the street who gave his last name as Pan. He said he saw roughly 100 people, as well as police officers and security guards everywhere.

Protests in China, while not uncommon, are usually quickly dispersed by authorities.

Photos of flowers laid in tribute in front of the school gate on Tuesday night, captured by a photographer for Beijing News, an official paper belonging to the Beijing city government, were quickly deleted from the newspaper’s website by Wednesday afternoon.

Online, people criticized Beijing News for posting the photos, and said the flowers were offered by people paid by foreign forces to stir up trouble.