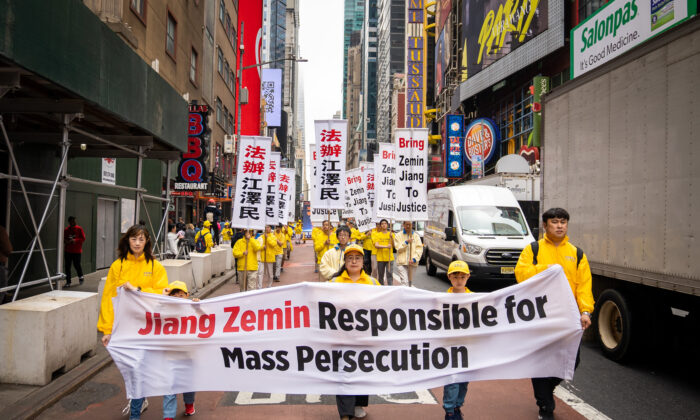 Falun Gong practitioners take part in a parade marking the 30th anniversary of the spiritual discipline's introduction to the public, in New York on May 13, 2022. (Samira Bouaou/The Epoch Times)
By Eva Fu

The death of former Chinese leader Jiang Zemin, who unleashed one of the bloodiest campaigns against a faith group in modern history, has brought fresh calls from rights advocates to hold the Chinese regime accountable for its widespread abuses.

Jiang, who rose to power after the 1989 Tiananmen Square massacre, presided over the Chinese Communist Party (CCP) from 1993 to 2003, although his influence within the Party persisted for many years after he formally stepped down.

His death on Nov. 30 of leukemia and multiple organ failure has put into focus Beijing’s atrocities, according to China critics and human rights advocates, who consider the former leader’s chief legacy as the architect of an array of human rights abuses that continue to threaten the basic rights of millions of people in China today.

“Jiang Zemin died a butcher in shame,” Chen Yonglin, a former political consul at the Chinese Consulate in Sydney who defected to Australia in 2005, told The Epoch Times.

Among the human rights community, Jiang is most known for his launching of the nationwide persecution targeting the spiritual group Falun Gong—a suppression campaign that continues today.

During the 1990s, the discipline, which involves meditative exercises and moral teachings based on the principles of truthfulness, compassion, and tolerance, surged in popularity, leading to an estimated 100 million practitioners in China. This popularity was perceived by Jiang to be a threat to his authoritarian rule.

International investigators have concluded that there has been widespread forced organ harvesting of detained Falun Gong practitioners under the regime’s orders, which started in the early 2000s and still persists.

The official eulogy in Chinese state media credited Jiang’s role in quelling the Tiananmen protests of 1989 and described his death as an inestimable loss to the Party. But Chen, who personally witnessed the bloody massacre in Beijing in 1989 and lost his father during the 10-year Cultural Revolution that wrecked the country in the previous decade, came away with a different understanding.

“The Chinese Communist Party is a crime syndicate, and he is the helmsman,” he said. “He has a mountain of blood debts on him.”

Beginning of the End?

For Erping Zhang, a spokesperson for the Falun Dafa Information Center, Jiang’s death offered a window for reflection.

While it may provide a source of comfort to dissidents and victims who experienced suppression under his reign, the news also marks a lost opportunity to bring him to justice, he said.

For Jiang’s ardent followers in China, it might now be the time to stand with what’s right, Zhang said.

The former leader’s death comes at a turbulent time when the CCP faces its stiffest challenge in decades.

Over the past week, protests broke out in more than a dozen Chinese cities calling for an end to the regime’s draconian zero-COVID policy, with some demonstrators going so far as to call for the ruling party to step down.

To Zhang, the developments remind him of what has typically occurred on the eve of a dynastic change over the course of China’s long history. At those times, the country is divided and hostility mounts from all sides.

“When the persecution of Falun Gong first started, the target was about 100 million,” he said, citing the estimates at the time. “Some people shied away because they thought it had nothing to do with them.

“But then [the CCP] went after Christians, the human rights lawyers, and Xinjiang Uyghurs. Now the zero-COVID policy touches everyone. No one is left out.”

Chen’s view is no different.

“The CCP has fallen from the peak of its power and is now in a precarious spot,” he said, believing that Jiang’s death could be a prelude to the regime’s eventual downfall.

But death shouldn’t mark the end of accountability, Chen said. Sooner or later, he expects to see the “accounts settled”—with Jiang and the CCP.