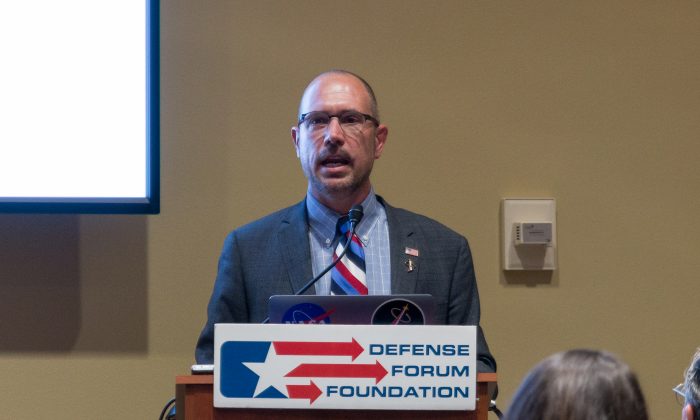 Greg Autry spoke at the Rayburn House Office Building on June 23 at an event held by the non-profit Defense Forum Foundation.
China

‘Death by China’ Author: Decades of US Appeasement Emboldened China to Continue Aggression

Despite China’s rapidly growing economy and engagement with the free world, the Chinese Communist Party remains firmly hostile to the liberal democracies of the West and has been overtly and covertly subverting the leadership and interests of the United States for decades, according to Greg Autry, who co-authored the 2011 book “Death by China: Confronting the Dragon.”

In a speech given on June 23, Autry said that he first became aware of Chinese regime’s brutal nature after a visit to China some years ago. Autry displayed a photo he took with several Chinese friends, one of which is a Chinese woman named Jennifer Zeng, whom he befriended during the trip and who was a Falun Gong practitioner. Zeng was later jailed, tortured, and separated from her family, all because the Chinese regime outlawed and persecuted her spiritual practice since 1999.

Autry said that the U.S. policy toward China since Richard Nixon’s rapprochement in the 1970s has always been defined by a persistent attempt to court China. According to Autry however, not only did this policy of appeasement fail to draw China into the U.S. orbit, it actually created a “Frankenstein” that remains fundamentally hostile to U.S. values and interests and is now turning the tables against the U.S.-led free world.

“Promises of benefits of engagement with China didn’t pan out. Chinese Communist Party rulers are still commies after all these years,” said Autry. “They live a good life for themselves at the expense of the common people of China.”

According to Autry, China’s trade practices against the U.S. economy and the stealing of U.S. technologies through hacking and other means are just the beginning of the Chinese regime’s decades-long campaign to undermine the free West.

Autry said that U.S. and the rest of the world are now entering a period of consequences, as evidenced by China’s ever-mounting military build-up and mounting aggressiveness against Taiwan, Japan, the United States, and “all of China’s neighbors.”

While the U.S. military remains superior in terms of technology and training, China can eventually defeat such an advantage in quality by building an overwhelming quantity of equipment and personnel for its People’s Liberation Army, said Autry.

“Productive capacity is what wins a real world war,” said Autry, citing the experience of World War II in which the United States overwhelmed Germany and Japan through its sheer amount of industrial capacity to produce and field military units. Due to decades of deindustrialization and manufacturing decline, the U.S. today no longer possesses such an advantage over China, according to Autry.

The non-profit Defense Forum Foundation invited Greg Autry to speak in the Rayburn House Office Building on Capitol Hill on June 23. Autry has published extensively advocating for a revitalization of America’s domestic industry and space program, and he also served briefly as a liaison for the Trump administration’s NASA transition team.

The 2011 book “Death by China: Confronting the Dragon” was co-authored by Greg Autry and University of California, Irvine professor Peter Navarro. The book was later made into a documentary film of the same name and released in 2012. Navarro, an economist who is also known for outspoken criticism of the Chinese regime and China’s trade practices against the U.S., was designated by President Donald Trump in January 2017 to head the newly created National Trade Council.

Speaking of his friend Peter Navarro, Autry said that Navarro is “doing his best” to alter the failed U.S. trade policy toward China, but resistances to Navarro’s efforts remain stiff.

“People who profited from doing business with China try hard to stop any talk of action confronting China,” Autry said. “I am still hoping we will see change.”