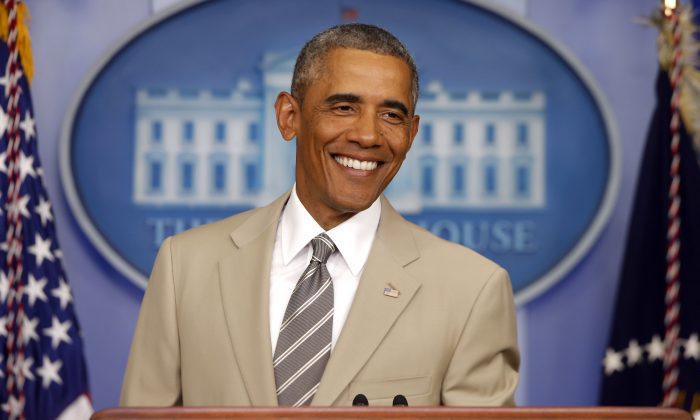 Dear President Obama, I Hope You Roll Out the Tan Suit Again

A Twitterstorm about Barack Obama’s tan suit can hardly have been what the president was expecting as he spoke at a press conference about foreign policy issues ranging from the IS insurgency in Iraq, civil war in Syria to the crisis in Ukraine.

Within minutes, more than 4,000 comments, and the resulting media frenzy, focused not on US foreign policy but on Obama’s sartorial choice. Unflattering comparisons with used car salesmen and estate agents and the suggestion that Obama had lost a bet were just some of the jokes about the suit.

Yet the meme of Hillary Clinton texting the president with “Hey Barack Welcome to My World” points to the more serious point about the focus on politicians’ dress. Hillary is just one of many female politicians who have seen their legitimacy destabilised by a focus on their hair and clothing, which distracts from important political and policy issues.

Studies conducted in the US and UK have shown that a majority of women politicians resent media comment on their appearance, and they don’t believe that the same level of sartorial scrutiny applies to men in public life.

This disproportionate, sometimes cruel and often damaging attention can be explained by the lack of women visible in politics and high office. Women who do make it through are more visible, and the feminised idea of fashion both makes it more “normal” for women to experiment with clothing, makeup and hair, and more legitimate to comment on their appearance.

Some have considered such attention to be politically damaging. This was the case when the then newly appointed Home Secretary Jacqui Smith was derided in the British press for wearing what was deemed an unsuitably low top in the House of Commons, revealing her cleavage. The resulting media furore focused around the charge that this illustrated her lack of judgement and therefore her unsuitability for high office.

Some years later Louise Mensch, then an up and coming MP, was angered when an interview with the Observer was headlined by the journalist’s curiosity as to whether Mensch had had a facelift.

Despite this, it’s not true that that comment on politicians’ dress applies only to women and that it’s always damaging. Male politicians can also be subject to such comment: from opposition to Michael Foot’s “donkey jacket” worn at the official Remembrance Day service in 1981, to the unflattering comparisons made between the then prime minister Gordon Brown’s ungainly dark suits and the middle class fashionable appearance of opposition leader David Cameron, men have also been subject to political attacks because of their dress.

Speaking to Vanity Fair in 2012 Barack Obama acknowledges this:

“You’ll see I wear only grey or blue suits. I’m trying to pare down decisions. I don’t want to make decisions about what I’m eating or wearing. Because I have too many other decisions to make.”

Apparently he didn’t think tan was so off-piste.

Female politicians have also had different relationships with dress and public commentary. Margaret Thatcher began her career as leader of the Conservative Party deeply resenting media focus on her appearance. She correctly identified it as political dangerous: typecasting her as an out of touch, suburban Tory lady in a hat and pearls. Thatcher ditched the hats, but drew a line at removing her pearls and adapted her dress to suit different audiences and political messages.

After a few years as prime minister, Thatcher’s dress, her blue suits, helmet hairstyle and handbags had become part of her political identity. She even invited BBC cameras to film her wardrobe and discussed her choice of clothes.

Theresa May’s dress has also arguably aided, rather than damaged her political career. There were the infamous leopard print kitten heels when she was chairman of the Conservative Party and now the often daring and colourful clothing she wears as home secretary.

But these positive examples are outweighed by many others when focus on politicians’ dress has distracted from their policies and careers. The central reason for this is that we have a political arena that does not truly reflect the diversity of society. Because of this, the norm of a politician’s dress is that of a white, upper-middle class, male: a dark suit and tie. Any public figure who does not look white, male and upper-middle class is therefore subject to heightened visibility, and women in particular are vulnerable to damaging comments on their appearance.

The deeply symbolic and intimate role our clothing has in defining our identity makes dress a perennially awkward, uncomfortable and also political subject. Dress largely aided the careers of Thatcher and May. But this was due to other political and social factors as well, and their fashion choices could just have easily been used to damage them.

So I hope President Obama continues to wear his tan suit. It doesn’t look too bad, and it may help challenge political culture as well.

Daniel Conway does not work for, consult to, own shares in or receive funding from any company or organisation that would benefit from this article, and has no relevant affiliations. This article was originally published on The Conversation. Read the original article.