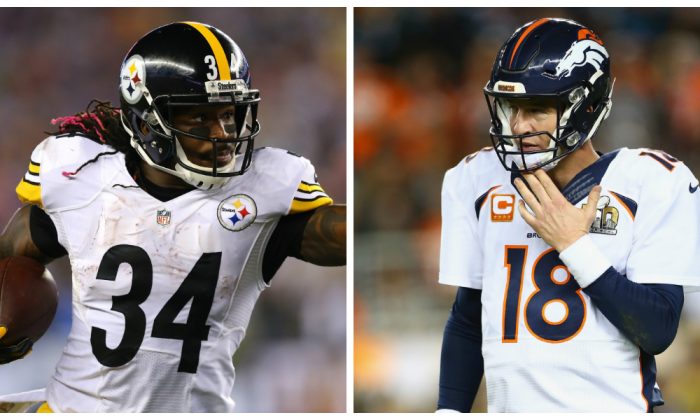 DeAngelo Williams and the Pittsburgh Steelers fell to Peyton Manning and the Denver Broncos in the AFC Divisional Round 23–16. (left photo by Maddie Meyer/Getty Images, right photo by Ronald Martinez/Getty Images)
NFL

Williams then gets into a Twitter disagreement with football columnist Pete Prisco.

😂u are kidding me right last year Peyton manning without the name would never have been in the NFL anywhere Pete😡😡 https://t.co/C4PvxGztIh

👀u went there Pete I knew u would travel down this dark alley and yes look at the stats without names and do a poll https://t.co/fcalatQd0Z

I disagree if he could he wouldn’t be retiring and we wouldn’t all be saying”it was time”and no one is stopping him😏 https://t.co/LTLhnVv7tW

The 39-year-old Manning statistically had his worst season in 2015. The normally-healthy Manning suffered through a foot injury before finally shutting it down for a few weeks during the middle of the season. He never seemed to recover to his old self.

In nine starts last season, he accumulated 2,249 passing yards while completing 59.8 percent of his passes and throwing 9 TDs—versus 17 interceptions—good for a career-low quarterback rating of 67.9. Nonetheless, the Broncos won seven of his nine starts thanks to a defense that ranked first in the NFL in fewest yards allowed per game.

The defense also shut down the favored Carolina Panthers in the Super Bowl as Von Miller recorded a pair of forced fumbles on Cam Newton that were the difference in the 24–10 win.

Meanwhile, other NFL players chimed in to congratulate Manning on his remarkable career.

It was an honor and a privilege Peyton. #FarewellSheriff

Too much respect for you my guy! pic.twitter.com/j7B6qRLj8a

Thanks Peyton “Pmoney, Papa John, Master P”!!! You showed us what greatness looks like! Thru all… https://t.co/kloDBg8zj4