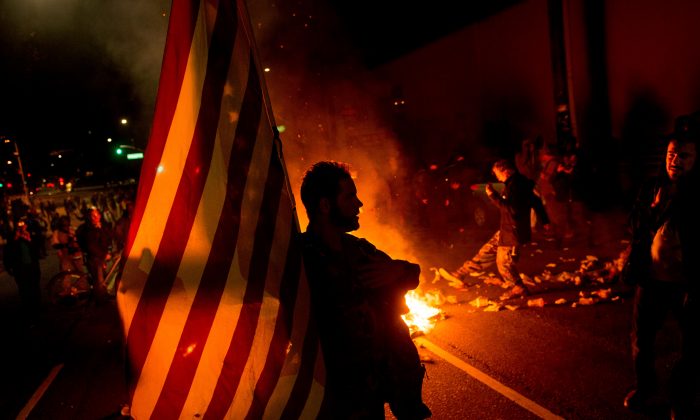 James Cartmill holds an American flag while protesting in Oakland, Calif., on Monday, Nov. 24, 2014, after the announcement that a grand jury decided not to indict Ferguson police officer Darren Wilson in the fatal shooting of Michael Brown, an unarmed 18-year-old. Several thousand protesters marched through Oakland with some shutting down freeways, looting, burning garbage and smashing windows. (AP Photo/Noah Berger)
US

DeAndre Joshua ID’d as Man Killed in Ferguson on Monday

DeAndre Joshua, 20, was identified as a man who was shot and killed during the protests-riots in Ferguson on Monday night.

The protests and unrest took place following a grand jury’s decision not to indict police officer Darren Wilson in the shooting of local teen Michael Brown.

According to USA Today, a resident in a nearby apartment complex spotted Joshua’s body inside of a parked car, a Pontiac Grand Prix, near where Wilson shot Brown on Aug. 9.

Family members of Joshua said that his death was linked to the protests on Monday.

“I’m still stunned because he never had any problems. He was a good kid,” relative Brian Joshua, 45, told the paper. “It’s like somebody just hit us with a brick.”

Grandmother Renita Towns said she didn’t have faith that the police would investigate the matter.

The network interrupted its afternoon programming Tuesday for Stephanopoulos to talk about the interview, even before excerpts were available. ABC News plans to feature portions of the discussion on “World News Tonight,” ”Nightline” and “Good Morning America” and promised to post the full interview on its website.

Stephanopoulos said no questions were off-limits for the interview, which took place less than 24 hours after a grand jury decided not to indict the 28-year-old officer in the shooting death of Michael Brown this summer. The shooting of the black man by the white police officer has inflamed racial tensions.

Stephanopoulos said Wilson told him he was sorry about Brown’s death, but that he feared for his own life in their confrontation this summer. The officer said that he did not believe he would have acted any differently whether Brown was black or white, the “Good Morning America” host reported.

“He has a clear conscience over his actions,” Stephanopoulos said.

In television terms, the Wilson interview was one of the biggest “gets” of the year, and the Ferguson police officer reportedly held discussions with representatives from CBS, NBC and CNN before deciding to speak with Stephanopoulos.