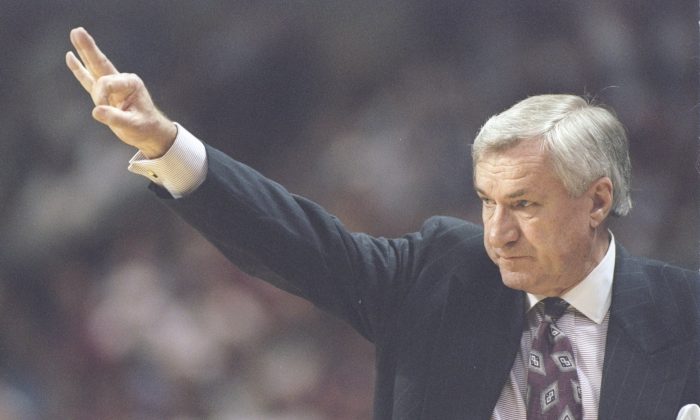 Coach Dean Smith of the North Carolina Tarheels gives instructions to his players during a playoff game against the Colorado Buffaloes at the Lawrence Joel Coliseum in Winston-Salem, North Carolina. (Doug Pensinger/Getty Images)
College Sports

Dean Smith: Where Does He Rank Among the Best NCAA Basketball Coaches?

I was growing up just as legendary North Carolina coach Dean Smith was beginning to wind down his career. Ironically, my favorite team (Kansas), was his alma mater who he faced in the 1991 and 1993 Final Fours. It was during the former matchup that Smith showed his true character in what had to be a frustrating moment for the great coach.

Down 76–71 with just 35 seconds remaining, Smith was given his second technical foul (which meant an automatic ejection) after repeatedly asking the referee how much time he had to make a substitution after one of his players, Rick Fox, fouled out. (The reason gave by the officiating crew was that Smith was outside the coaches box.)

Instead of flipping out and making a scene, the ever-classy Smith took it in stride, went over to the opposing bench, and shook the hands of each KU player and coach before exiting to the locker room with a smile on his face.

Of course Smith could coach too. When he retired in 1997, he was the all-time NCAA wins leader with 879. Here’s where his coaching resume ranks among the all-time greats. (Just missing the cut are Jim Boeheim, Bill Self, Jerry Tarkanian, Lute Olson, and Hank Iba):

10. Phog Allen: 719–259 overall, 24 conference titles, 3 Final Fours, 1 national title—Allen actually coached Dean Smith in the early 50s and Smith was on his ’52 title-winning team. Allen was also the one who recruited Wilt Chamberlain to Kansas, but was forced into mandatory retirement a year before “The Big Dipper” was eligible to play.

8. Rick Pitino: 712–245 overall, 10 conference titles, 7 Final Fours, 2 national titles—Pitino restored the luster at both Louisville and Kentucky, winning titles at both stops. Even more impressive was taking little-known Providence to the Final Four in ’87.

7. Roy Williams: 742–196 overall, 15 conference titles, 7 Final Fours, 2 national titles—Dean Smith’s right-hand man and eventual successor has had successful stops at both Kansas and North Carolina, though only with the Tar Heels was he able to cut down the nets.

6. Jim Calhoun: 877–382 overall, 16 conference titles, 4 Final Fours, 3 national titles—Calhoun did a masterful job in turning Connecticut them into a national contender. Eight times he won 30 games and he won his three titles in a 13-year span.

4. Dean Smith: 879–254 overall, 17 conference titles, 11 Final Fours, 2 national titles—Four of Smith’s Final Four runs came during UCLA’s ridiculous run (’67-’69, ’72) which resulted in zero titles, but consistency was his best trait. Smith’s final 23 teams made the tournament and four times in his last seven years they made it to the national semis.