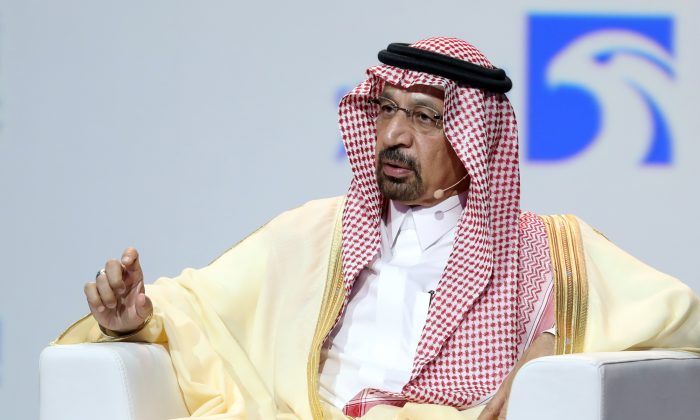 Rocked by political scandal, Saudi Arabia is in a difficult position to counter President Donald Trump’s demands that the kingdom keep oil prices low, which is indirectly bankrolling both the U.S. economy and Trump’s campaign of pressure against Iran.

Saudi Arabia’s political credit took a hit when the kingdom acknowledged its operatives killed Saudi-American journalist Jamal Khashoggi at the Saudi Embassy in Istanbul on Oct. 2.

Trump has carefully balanced his response, denouncing the crime but not directly blaming Saudi Crown Prince Mohammed bin Salman. Yet, the president seems to be driving a hard bargain, demanding that the kingdom keep oil prices down—a bitter pill to swallow for the oil-dependent monarchy.

“Hopefully, Saudi Arabia and OPEC will not be cutting oil production. Oil prices should be much lower based on supply!” Trump said in a Nov. 12 tweet, after Saudi Minister of Energy Khalid Al-Falih said earlier that day that the kingdom would slash oil exports by 500,000 barrels per day in December.

Trump needs low oil prices to keep momentum in the U.S. economy and also to deny as much oil profit as possible to Iran. His administration holds a litany of grievances against Iran for supporting terrorists, lying about the development of nuclear weapons, and otherwise destabilizing the region.

Saudi Arabia is no fan of Iran and is currently leading a military operation against Iran-backed Houthi militants in neighboring Yemen.

In June, Trump convinced Russia and the Organization of the Petroleum Exporting Countries (OPEC), where Saudis hold major sway, to increase production by 1 million barrels per day in anticipation of crippling sanctions on Iran’s energy sector.

But three days before the sanctions were about to snap in on Nov. 5, the Trump administration handed out waivers to eight of the biggest importers of Iranian crude. Since then, Brent crude fell to less than $67 from about $73 per barrel—a far cry from the Oct. 3 high of more than $86.

Saudi Arabia would need oil prices to stay well above $70 a barrel to meet its goal of a balanced budget by 2023, according to the International Monetary Fund (pdf).

OPEC is pushing for the group and its partners, including Russia, to reduce output by 1 million to 1.4 million barrels per day, which will likely be discussed at its Dec. 6 meeting in Vienna.

“It appears that the market takes a production cut for granted,” said PVM Oil Associates strategist Tamas Varga, suggesting that oil prices will stabilize until then.

But Russia hasn’t been quite as eager to commit to the cuts.

Crack in the Front

“We need to see how the situation develops in November and early December to better understand both the current conditions and the winter outlook,” Russian energy minister Alexander Novak said on Nov. 19, Bloomberg reported.

“We need to make a balanced decision, and so far there are no criteria for it.”

“For a cut to be successful in supporting the market, they’re going to have to present a front that is not fractured and the chance of that is looking less and less likely as Dec. 6 approaches,” said Bob Yawger, director of energy futures at Mizuho in New York, commenting on the OPEC meeting.

If Saudi’s economic bulwark appears unstable, their political one isn’t much better.

Trump said he’ll have a “very full report” on Khashoggi’s death by Nov. 20. The United States already sanctioned 17 senior Saudi officials on Nov. 15, shortly after Riyadh called for the death penalty for five suspects in the journalist’s killing.

Trump doesn’t appear eager to pummel the kingdom further on the political front, but if he’s to back Prince Mohammed through the tough times, he may decide to cash in on the favor in oil.

In good news to consumers, the bearish oil market has shaken off many a speculator. Weekly exchange data shows money managers hold a combined net long position equivalent to around 364 million barrels of U.S. and Brent crude futures and options, down from over 800 million barrels two months ago.

Speculation can increase volatility in the market, divorcing it from economic realities.