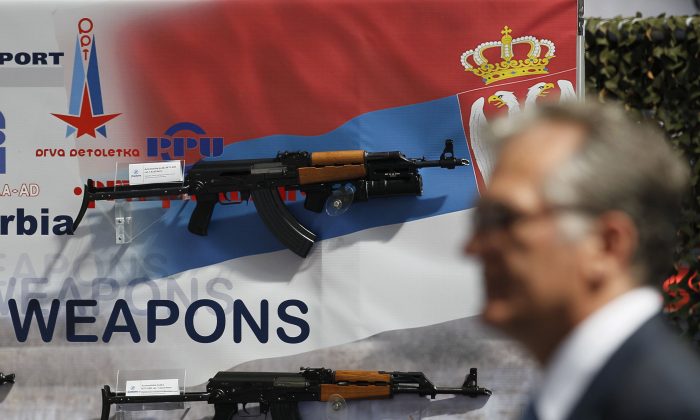 In this Tuesday June 28, 2011 file photo, a visitor looks at assault rifles made by the Serbian company Zastava Arms, during a defense fair, in Belgrade, Serbia. The head of a Serbian arms factory, Milojko Brzakovic, director of the Zastava factory, says several weapons used by Islamic militants during the Paris attacks have been identified as produced by his company in the early 1990s. (AP Photo/Darko Vojinovic, File)
Europe

Dealer Says Gun Linked to Paris Attack Came Via US

BELGRADE, Serbia  — One of the guns linked to Islamic militants in the Paris attacks that killed 130 people was exported to the United States in 2013, the head of a Serbian arms factory said Thursday.

Milojko Brzakovic of the Zastava arms factory told The Associated Press that the M92 semi-automatic pistol’s serial number matched one his company delivered to an American online arms dealer in May 2013. It was not clear how the gun got back to Europe.

At least seven of the weapons used or discovered after the Nov. 13 attacks in Paris have been identified as being produced by the Serbian factory located in Kragujevac, in central Serbia. Most were manufactured before Yugoslavia broke up in a civil war in the 1990s and most of those are modified versions of the Soviet AK-47, or Kalashnikov.

Brzakovic said all the guns were delivered legally but could have later found their way into illegal channels.

He said the M92 pistol “is a semi-automatic weapon, a hunting and sporting weapon … it cannot fire barrage fire, only single shots … which are legal in America.”

He said it was exported to an online arms seller in the United States, the Florida-based Century Arms, to which his factory exports up to 25,000 hunting and sports guns every year. He said the gun was delivered as a semi-automatic, but he did not know whether someone turned it into an automatic after delivery. The so-called “shortened Kalashnikov” is listed by U.S. arms dealers as selling for about $460 apiece.

In a video posted online in December 2013, Century Arms advertised they were selling the AK-style pistol PAP M92, “a brand new firearm from the Zastava factory in Serbia” and demonstrated its attributes.

The AP left messages seeking comment on the gun with Century Arms, the FBI and another U.S. government agency, the Bureau of Alcohol, Tobacco, Firearms and Explosives.

Brzakovic insisted that all arms exports from Serbia are under strict government control.

“We submit a request to our government to give consent and authorize the export. Until we receive that, we make no contract. Once we get a permission to export, we make a contract and arrange the dynamics,” he said.

A web of rules and a large U.S. bureaucracy oversee the legal import and export of weapons like the Serbian M92 semi-automatic pistol.

American government approval is required to import firearms into the U.S.

To legally ship firearms back out, the individual or company would have to be registered with the State Department, which controls items covered by the U.S. Munitions List. An export request is submitted to State and a decision to grant the request is based on a variety of factors, including the type of weapon and its eventual destination.

Individual weapons are not tracked by serial numbers unless a single weapon is being exported, according to the State Department. The U.S. does not make publicly available the names of licensed weapons exporters as that information is considered proprietary.

Brzakovic said it would be wrong to accuse Zastava of selling weapons to terrorists.

“Here’s where the weapons ended, there’s the data. Zastava cannot be blamed for where it went afterward,” Brzakovic said.

But he agreed that an illicit gun deal could have taken place even after arms were delivered legally.

“Wherever there are wars, there are bigger possibilities for abuse and to hide the channels for guns. They end up where they shouldn’t,” he said, adding: “We have a data base in the factory for the last 50 years, we know where a gun has been delivered.”