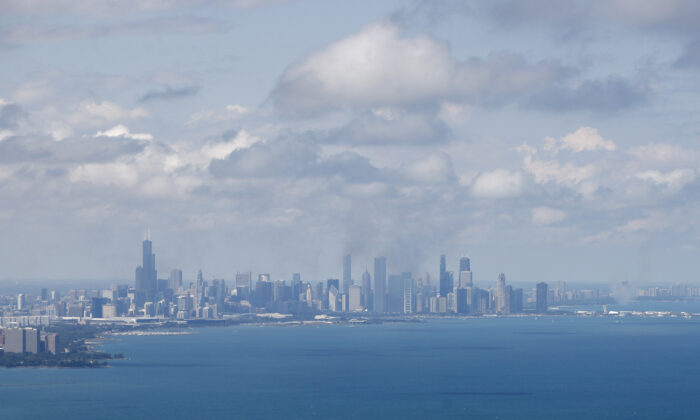 A view of the Chicago skyline in a 2019 photograph. (Kamil Krzaczynski/AFP via Getty Images)
US News

Deadspin will move from New York to Chicago and the company that owns it will not negotiate, for now, with unionized staff, the CEO of the website’s owner said.

Deadspin, a sports news website, became embroiled in controversy late last year when Jim Spanfeller, CEO of G/O Media, instructed writers not to report on certain issues, according to the union, an arm of Writers Guild of America.

The clash led to a number of Deadspin writers and editors resigning.

“‘Stick to sports’ is and always has been a thinly veiled euphemism for ‘don’t speak truth to power,'” the union said.

The situation devolved further when new writers who began writing for Deadspin were harassed online, prompting fresh resignations. The site hasn’t published any articles since November 2019.

In a letter to the union dated Jan. 10, Spanfeller said that his goal was to restart Deadpin “as soon as possible and in a manner that provides both the editorial freedom necessary for such a platform and the business focus to ensure its long-term sustainability.”

G/O decided to move Deadspin, which will remain a platform dedicated to sports, under The Onion corporate structure and will move Deadspin’s headquarters to Chicago in the media company’s office, Spanfeller said. Former Deadspin employees are still welcome to return to their former positions working in the New York office.

In terms of negotiations with the union, “we believe we have reached a point where our discussions are no longer productive and as such, we will not engage in further discussion on this topic,” Spanfeller said.

“We have and will continue to respect the editorial integrity of our journalists at each of our platforms. The contractual provisions, as they currently exist, more than do this, with language that far exceeds anything that exists elsewhere in the digital media industry.”

Further revisions, such as wanting staff to have veto power over who might be hired as their boss, go “far outside the norms” of the industry, Spanfeller said.

He also criticized the harassment of at least one writer who joined Deadspin after the mass resignations and asked the union to ensure and confirm that the union and its members would not take action in the future toward job applicants.

“The bottom line,” he wrote, “is we will not jeopardize this business, which employs over 400 people across our other news platforms and continues to attract top-notch talent.”

“The GMG union sought to negotiate with management in good faith for functional protections of editorial independence to prevent further damage to this company, and to allow us all to do our jobs in peace, and to the high standards to which we hold ourselves,” the union stated.

“Management communicated today that they intend to pull out of these negotiations. We are disappointed that upper management refuses to recognize the effects of their actions.”

Members of the unit “vehemently object” to the decision to shift the headquarters to Chicago, the statement added, concluding, “You’ll be hearing more from us on these issues soon.”