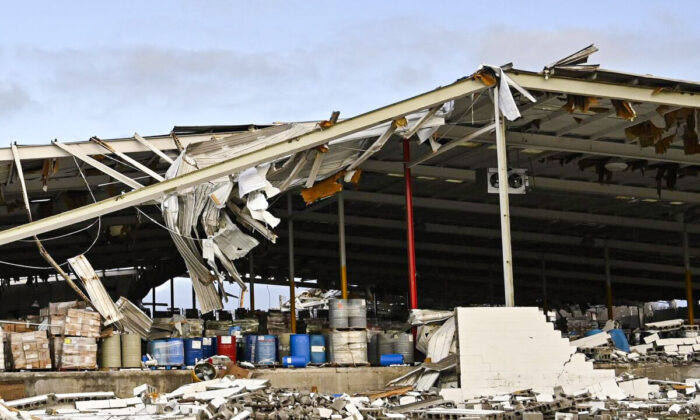 A major storm system ripped through multiple U.S. states on Friday, hitting a candle factory in Kentucky with more than 100 employees still inside the building at the time the tornado struck, bringing down the roof and causing mass casualties.

The series of U.S. storms started early on Friday and are already blamed for multiple deaths and injuries across parts of the Midwest and South. In Kentucky, the death toll could exceed 100, the state’s governor said during a press briefing.

Kentucky Gov. Andy Beshear told the early morning news conference that it is going to be “some of the worst tornado damage that we’ve seen for a long time,” calling the weather event a “mass casualty” incident.

“The level of devastation is unlike anything that I have ever seen,” Beshear said. “We were pretty sure that we would lose over 50 Kentuckians, I’m now certain that that number is north of 70. It may in fact end up exceeding 100 before the day is done.”

Beshear also announced the deployment of about 180 guardsmen, including search and extraction, as the governor declared a state of emergency and requested President Joe Biden make a federal emergency declaration.

Kentucky emergency management director Michael Dossett said at the same briefing that the storm appears to be the first quad-state tornado storm in the state’s history.

“This tornado event may surpass the one in 1974 … as one of the most deadliest in Kentucky’s history,” Dossett said, adding that this will be “one of the darkest days in the state’s history.”

The primary tornado was on the ground for more than 200 miles, Beshear said. It would be the longest travel of any tornado in the state for nearly 100 years.

Meanwhile, significant damage has also been reported in other parts of the United States, including at an Amazon fulfillment center in Illinois, where a wall about the length of a football field collapsed, along with the roof above it. Tornadoes also ripped through Missouri, Arkansas, and Tennessee.

At least 100 emergency vehicles descended upon the Amazon warehouse near Edwardsville, about 25 miles east of St. Louis. It wasn’t immediately clear how many people were hurt, but one person was flown by helicopter to a hospital.

Illinois Gov. JB Pritzker said in a statement that he has contacted the mayor in Edwardsville to request if they need any state resources.

Amazon spokesperson Richard Rocha said in a written statement on Friday that the company’s top priority now is “the safety and well-being of our employees and partners.”

Edwardsville Police Chief Mike Fillback said several people who were in the building were taken by bus to the police station in nearby Pontoon Beach for evaluation. By early Saturday, rescue crews were still sorting through the rubble to determine if anyone was trapped inside.

“Please be patient with us. Our fire personnel are doing everything they can to reunite everyone with their loved ones,” Fillback said on KMOV-TV.

Three storm-related deaths were confirmed in Tennessee, said Dean Flener, spokesman for the Tennessee Emergency Management Agency. Two of the deaths occurred in Lake County, and the third was in Obion County—both in the northwestern corner of the state.

A tornado struck the Monette Manor nursing home in Arkansas on Friday night, killing one person and trapping 20 people inside as the building collapsed, Craighead County Judge Marvin Day told The Associated Press.

Five people had serious injuries, and a few others had minor ones, he said. The nursing home has 86 beds.