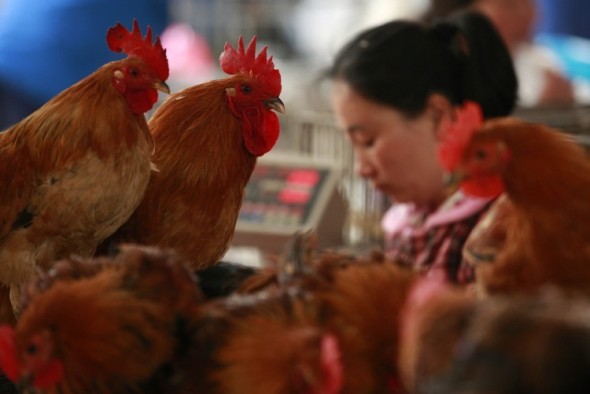 A chicken stall in Anhui Province on April 2. A deadly new form of bird flu may have mutated from pigs in China. (The Epoch Times Photo Archive)
China

A new and deadly strain of bird flu is threatening two eastern Chinese provinces, with health authorities and virologists suspecting that a virus mutation is the link between the dead pigs that floated past Shanghai, dead migratory birds in north China, and the deaths of three people.

Two new cases of H7N9 bird flu, one of them fatal, have been reported in east China’s Zhejiang Province, bringing the total number of infections in the country to nine, according to a report by Chinese regime’s state media Xinhua.

Seven other H7N9 bird flu cases had been reported previously, with two people dying in Shanghai, one critical case in Anhui and four critical cases in Jiangsu, according to the report.

None of those who died had any links to poultry, though one of the men who died, Mr. Wu, was a pork butcher, according to the Guardian and Shanghai Daily.

On April 2, following the deaths of the two men, Shanghai authorities issued a level-three flu alert, the second-lowest stage of four levels. The authorities also claimed that no new cases had been reported in Shanghai.

However, Hong Kong newspaper Wen Wei Po reported that Shanghai authorities failed to report five previous severe cases of pneumonia caused by unidentified pathogens. The cases tested negative for SARS, but it reminded unclear if the cases have been tested for bird flu virus or not.

A respiratory specialist working in a Shanghai hospital spoke on condition of anonymity to Wen Wei Pao, saying that the hospital has seen a dramatic increase in severe cases of pneumonia caused by unidentified pathogens, with five cases in a two-week period in March. Usually they only treat an average of two to three cases in a one-year period, the source said.

Hong Kong’s Apple Daily reported that Wu was admitted to Shanghai’s Fifth People’s Hospital on March 3 with a diagnosis of regular pneumonia. He was hospitalized on the same floor as Li, the first victim. On March 6 his family members were told that Wu was in critical condition. Wu’s wife suspected that Wu contracted the H7N9 virus from Li since the hospital staff did not take any quarantine measures during Li’s stay on the same floor.

After filing a complaint with the hospital, the family received 130,000 yuan ($20,964) in compensation from the hospital.

The fact that Wu was a pork butcher has sparked concerns among many Chinese, who worry that the new H7N9 virus may be linked to the dead pigs in the Huangpu River off Shanghai.

The events could be unrelated, or this could be how pandemics begin, a report by Foreign Policy warned.

Chinese authorities reported that some of the dead pigs tested antibody-positive for circoviruses, a common pig virus, but they have not explained how a pig virus that affects only very young pigs could kill adult pigs, nor have they commented on the deaths of migratory birds in northern China, says Foreign Policy.

Because Wu was a pork butcher with no exposure to poultry, the article explains how he could contract bird flu: “One very plausible explanation for this chain of Chinese events is that the H7N9 virus has undergone a mutation.”

“Once influenza adapts to pig cells, it is often possible for the virus to take human-transmissible form. That’s precisely what happened in 2009 with the H1N1 swine flu, which spread around the world in a massive, but thankfully not terribly virulent, pandemic.”

“As far as any scientists know, the H7N9 forms of flu have never previously managed to infect human beings, or any mammals–it is a class of the virus found exclusively in birds. It is therefore extremely worrying to find two people killed and one barely surviving due to H7N9 infection.”

According to Japan’s Kyodo News, medical experts have found out that the H7N9 type of bird flu virus is highly likely a pathologically virulent strain that could cause serious medical complications in those infected, sources close to the study said.

Chinese authorities waited for three to four weeks to inform the public about the first two death cases in Shanghai. This has raised concerns among Chinese who worry that there will be another cover-up, just like the SARS cover-up in 2003, which led to thousands of infections and hundreds of deaths.