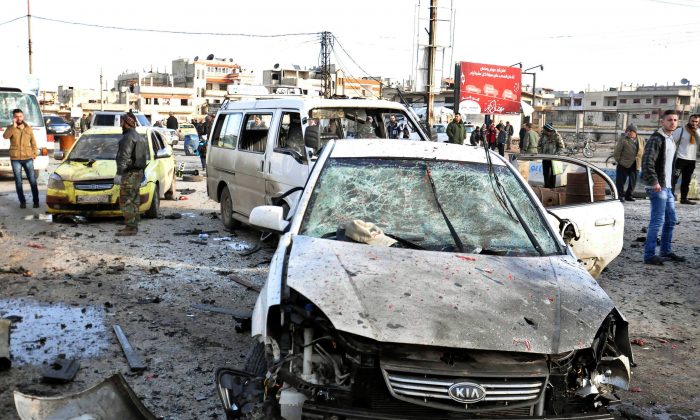 In this photo released by the Syrian official news agency SANA, Syrian citizens gather at the scene where twin bombs exploded at a government-run security checkpoint, at the neighborhood of Zahraa, in Homs province, Syria, Tuesday, Jan. 26, 2016. (SANA via AP)
Middle East

BEIRUT—Multiple bombings targeted a government-run security checkpoint in the central Syrian city of Homs on Tuesday, killing at least 20 people and wounding over a hundred amid intense political jockeying ahead of U.N.-backed peace talks scheduled to begin in Geneva Friday.

With just three days to go, the opposition is still undecided about whether it will attend the talks, throwing diplomatic efforts into question even as the U.N.’s special envoy to Syria was preparing to send out invitations.

The talks are meant to start a political process to end the conflict that began in 2011 as a largely peaceful uprising against Assad’s rule but escalated into an all-out war after a harsh state crackdown. The plan calls for cease-fires in parallel to the talks, a new constitution and elections in a year and a half.

The attack in Homs, which was claimed by the Islamic State group, came as government forces retook a strategic town from opposition fighters and militants in the south of the country.

Homs Governor Talal Barazi told the SANA news agency that the checkpoint was hit “first by a car bomb, which was then followed by a suicide bombing.”

The Islamic State group claimed responsibility, according to a report by the Aamaq news agency, which is affiliated with the extremist group.

Syrian state television broadcast footage of the aftermath of the Homs bombing, showing cars ablaze and extensive damage to shops and apartments around the site of the explosion in the Zahra neighborhood, which is inhabited mostly by members of President Bashar Assad’s Alawite sect, an offshoot of Islam.

The district has been a frequent target of bombings in the past few months.

The Britain-based Syrian Observatory for Human Rights, an opposition group which relies on a network of informants across Syria for its news, said the death toll had climbed to 25, with 15 of the casualties being security personnel.

The Observatory quoted witnesses at the scene saying the first bomber attracted a crowd of security agents by shouting curses about the Homs governor, then blew his vehicle up.

Homs, which was once known as the “capital of the revolution,” is Syria’s third largest city and was one of the first to rise against the government in 2012. Government forces have since managed to expel most militants from the city and much of it has been destroyed.

Meanwhile, in southern Syria, government forces took control of the town of Sheikh Maskin, culminating an offensive that began in late December to retake the town after seizing the Brigade 82 military base, nearby.

Sheikh Maskin lies near the highway connecting Damascus and the Jordanian border and connects the Syrian capital to Daraa, a border town held by opposition fighters. It is the latest in a string of battlefield successes for Assad’s military that have bolstered his hand ahead of the planned peace talks.

The Saudi-backed opposition was meeting Tuesday in Riyadh to make a final decision whether to attend the talks. The opposition has accused Russia, a key backer of the Syrian government, of trying to “dictate” who from the opposition would participate in the talks.

Tensions over who would be invited to the talks forced a few days’ delay and continued Tuesday, few days before Friday’s target date.

Russia argued strongly against Turkey’s demand to keep a leading Kurdish group out of the talks, and said it expects the U.N. envoy to resist “blackmail by Turkey and others, reflecting the sharp differences that remain.

Russian Foreign Minister Sergey Lavrov emphasized at a press conference in Moscow that the main Syrian Kurdish group — the Democratic Union Party, or PYD — plays an important role in fighting the Islamic State group and is an essential part of political settlement in Syria.

Turkey sees the PYD and its YPG militia group as branches of the Kurdistan Workers’ Party, a Kurdish group that Ankara has long fought and considers a terrorist group.