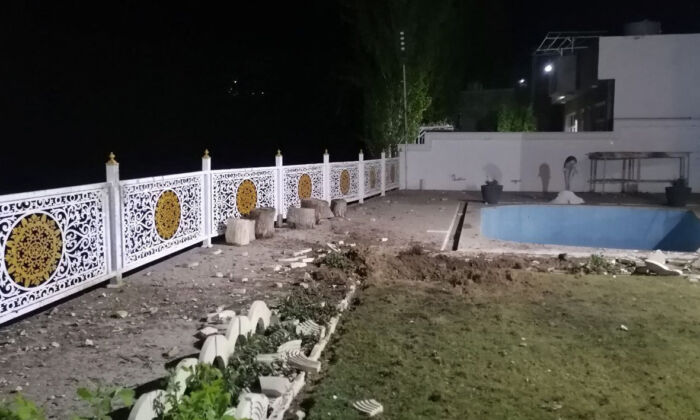 A picture shows the damage at a house following artillery strikes purportedly carried out by the Turkish army in the village of Hrouri in Iraqi's Kurdistan near the Turkish border north of Dohuk on April 25, 2022. (AFP via Getty Images)
Middle East

While Baghdad blames next-door Turkey for the attack, Ankara denies the accusation, pointing the finger instead at the Kurdistan Workers Party (PKK), a militant group based in mountainous areas of the Kurdish region near the Iraq–Iran border.

“There’s no conceivable reason why Turkey would target a civilian area,” Abdullah Agar, a Turkish security expert and retired special forces officer who served in Iraq throughout the 1990s, told The Epoch Times. “Those opposed to Turkey’s presence in northern Iraq are exploiting the incident for their own ends.”

The incident has roiled Ankara’s relations with Baghdad, which is accusing Turkey of violating Iraqi sovereignty and is calling for the withdrawal of all Turkish troops from its territory.

According to Iraq’s Defense Ministry, the Turkish army currently maintains more than 100 outposts in northern Iraq, manned by upward of 4,000 soldiers.

On July 20, nine people were killed and two dozen were injured when four artillery shells struck a tourist area in the Iraqi city of Zakho.

Located in the Kurdish region’s Duhok Province, Zakho sits only a few kilometers from the Turkish border. All the victims, including two children, were tourists from central and southern Iraq.

Baghdad and the Erbil-based Kurdish Regional Government (KRG) immediately blamed the carnage on Turkey, which frequently conducts anti-PKK operations in the area.

Ankara quickly denied involvement, urging Iraqi officials to not believe PKK “propaganda” and to “cooperate in bringing the real perpetrators to light.”

Despite the denial, anti-Turkey demonstrations were seen throughout Iraq in the immediate wake of the incident. At one point, Turkey’s embassy in Baghdad was surrounded by protesters calling for the ambassador’s expulsion from the country.

Iraqi Prime Minister Mustafa al-Kadhimi called the attack a “flagrant violation of Iraqi sovereignty,” while the KRG stated that Turkey’s decades-long conflict with the PKK posed a “constant threat” to the lives of its citizens.

Currently based in northern Iraq, the PKK claims to seek the establishment of a Kurdish state in parts of Turkey, Syria, Iraq, and Iran. It has carried out numerous attacks inside Turkey over its 45-year history and has been branded a terrorist group by Ankara, Washington, and Brussels.

Agar, who lectures on security issues at Istanbul’s Bahcesehir University, was quick to note that last week’s attack in Duhok occurred in the run-up to a planned Turkish offensive in northern Syria against the YPG, the PKK’s Syrian affiliate.

“Despite opposition from the United States, Russia, Iran, and Israel, the Syria operation is still on the table,” he said. “All the groundwork has been laid.”

The incident has thrown a spotlight on Turkey’s ongoing military activities in Iraq’s Kurdish region, which has enjoyed relative autonomy since the First Gulf War in 1991. At about the same time, the PKK took the region’s rugged Qandil Mountains—roughly 150 kilometers northeast of Erbil—as its main base of operations.

Since then, Turkey has waged several campaigns in northern Iraq, with the aim of preempting attacks by the PKK on Turkish civilian and military targets.

In 2019, Turkey began a fresh round of operations, the most recent of which—dubbed “Operation Claw-Lock”—targets PKK militants in the mountains of Duhok.

Baghdad has repeatedly criticized these operations, saying that they violate Iraq’s national sovereignty.

On July 24, an Iraqi parliamentary committee held an emergency session to discuss what it described as “repeated violations of Iraqi sovereignty” by the Turkish military.

Notably, committee members also stressed the need to halt the PKK’s activities in Iraq, calling for the deployment of federal troops to patrol Iraq’s fraught border with Turkey.

In a recent interview with the Kurdish region’s Rudaw Media Network, Iraqi Foreign Minister Fuad Hussein noted that Iraq’s constitution expressly forbids the PKK from operating inside the country.

“It’s unacceptable for the PKK to organize military activities on Iraqi or Kurdistan Region territory and attack another country [such as Turkey],” Hussein said. “The PKK is a problem for Iraq—but this can’t be resolved by Turkish attacks.”

When asked about last week’s attack in Duhok, he said that “all the military information that we have received indicates that it was [carried out by] the Turkish army.”

Nevertheless, on July 25, Turkish President Recep Tayyip Erdogan repeated the assertion that “terrorists” bent on derailing Turkey–Iraq relations were responsible for the bloodshed.

On the same day, the U.N. Security Council vigorously condemned the attack, calling on member states to “cooperate actively” with ongoing investigations by Iraqi authorities.

At a follow-up meeting in New York on July 26, Hussein urged the Security Council to adopt a resolution demanding Turkey withdraw all its troops from Iraq. He also accused Turkey of “broadening” its military presence in Iraq, using its long-running war with the PKK as a pretext.

Agar contested this assertion, saying: “Turkey poses no threat to Iraq. It’s the groups Turkey is fighting—the PKK and the YPG—who threaten the sovereignty of their host countries.”

On July 27, Turkey’s consulate-general in the Iraqi city of Mosul, located directly adjacent to the Kurdish region, came under mortar attack by unknown assailants. No casualties were reported.