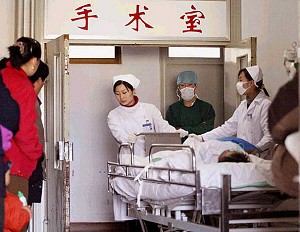 Family members watch as nurses wheel a patient into a hospital in China. (AFP/AFP/Getty Images)
China

A woman who died of injuries sustained in a traffic accident had her corneas removed without permission while in a Fujian hospital mortuary.

When the family of accident victim Zhang Rizhu claimed her body, they found that someone had removed her corneas. Fujian police investigators confirm that Zhang's corneas were indeed removed form her corpse, but as yet have no suspects.

According to a report in the February 17 edition of the Fujian Southeast Express, Zhang was hit by a motorcyclist while riding her bicycle on December 1, 2007. She sustained serious head injuries and was taken to Chengtou Township Hospital in Fuqing City for emergency treatment. The next morning, Zhang was transferred to Rongqiang Hospital, where she died four days later.

According to a relative named Gonfa, Zhang's mother and husband visited her regularly while she was in the hospital, and saw no signs of eye injury. When they viewed her body in the mortuary the day after her death, they saw bloodstains surrounding Zhang's eyes. The family reported this to the police, who photographed the body as evidence.

“We realized something was wrong,” Gonfa explained. “Two forensic experts told us the corneas had been removed.”

The family is relying on the police department's investigative experts to solve the case.

Wu Shouze, deputy head of the hospital, told reporters, “Our investigation indicates that nobody in the hospital purposefully stole the corneas; the staff handled the case according to hospital regulations.”

Fujian police began their investigation on February 1. So far, no suspects have emerged.