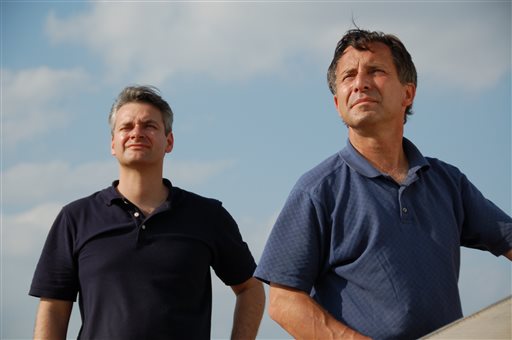 This undated photo provided by The Discovery Channel shows Carl Young, left, and Tim Samaras watching the sky. Jim Samaras said Sunday, June 2, 2013, that his brother storm chaser Tim Samaras was killed along with Tim’s son, Paul Samaras, and another chaser, Carl Young, on Friday, May 31, 2013 in Oklahoma City. The men were remembered for their courage and dedication to researching tornadoes. ( AP Photo/Discovery Channel)
Special

Tim Samaras, his son Paul Samaras, and his tornado research partner Carl Young are remembered by their colleagues and family for being brave tornado researchers. Their research included getting close to tornadoes, which led to their death several days ago.

All three were engaged in important work, but Tim Samaras was especially remembered for innovative methods during his 24 years in the field.

“Tim was a pioneer, no question about it,” Mark Bettes, a meteorologist, said. “I think he was looked up to by many, many people. It’s a sad day for the weather community, and I think that what he did pushed the envelope.”

“Tim was the best out there—the most respected, the most conservative—and he was only trying to do great things,” said Ginger Zee, a meteorologist with ABC.

The tornado outbreak on May 31 that took the three researchers’ lives was one of the biggest in recent times, according to another researcher and storm chaser.

“This was by far one of the most adrenaline rush, terrifying storm chases I have ever been on, and probably ever will be on,” said Jared Stevenson.

Tim Samaras told the Weather Channel in an interview last year that when he was small he would take apart all the appliances in the house to learn how they were put together. Later in life, he built all the machines he used to take measurements of tornadoes, an area of science that is still closely studied.

“We still don’t have a clear understanding of why some thunderstorms create tornadoes and others don’t,” he said.

The research the three were involved in is critical to better understanding tornadoes.

“Tornadoes are extremely hard to measure, and it’s critical that we do so in order to understand how they’re formed and how we might forecast them better,” said Dr. Jeff Masters, director of meteorology at The Weather Underground. “So it’s absolutely necessary that researchers like Tim Samaras go out in the field and take these sorts of measurements.”

Despite the inherent danger of the profession, Jim Samaras, brother of Tim and uncle of Paul, said that the family was “very shocked and surprised” when they heard the news.

Tim was a “genuinely nice person, incredible father, and a controlled storm chaser,” he said.

Samaras and his two colleagues were aware of the danger.

“I plant probes in the paths of tornadoes, and in order to get them correctly in the paths, you have to be close,” said Samaras in a 2004 interview with CNN. His work included researching thunderstorms.

The work was a balance between staying alive and getting the data they sought.

“I’m pretty focused on our safety, certainly, and I’m focused on getting the data and getting in the right spot,” Samaras said. “You only have one chance to do it, and I want to make sure to be at the right spot.”

Samaras and Young, who previously starred in the Discovery Channel series “Storm Chasers,” were part of TWISTEX, which researches tornadoes. They tracked down over 125 tornadoes over the years. Young became interested in tornadoes after witnessing one up close and linked up with Tim Samaras in 2003, after they met, and Samaras encouraged him to collect data from inside tornadoes for his thesis research.

Paul, meanwhile, was a videographer for TWISTEX, and an accomplished photographer.

“We will miss the drive, heart and commitment all three brought to their work and to their lives,” said Eileen O’Neill, group president of the Discovery & TLC Networks, in a statement.