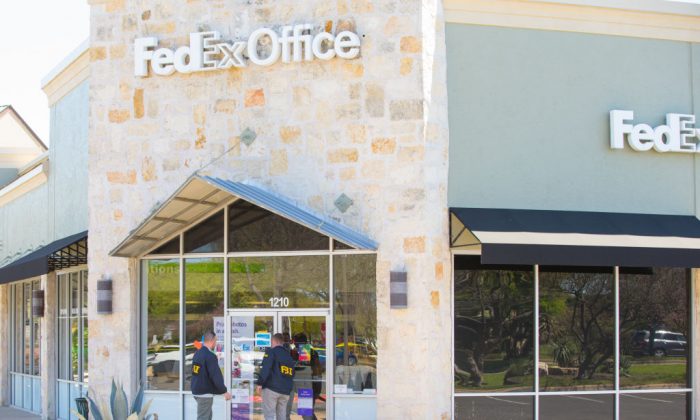 FBI Agents investigate at the Sunset Valley FedEx store located on Brodie Lane in Austin, Texas, which is linked to the package bomb which exploded on a conveyor belt in the sorting facility in Schertz, Texas on March 20, 2018. (SUZANNE CORDEIRO/AFP/Getty Images)
Crime and Incidents

The suspect in the string of Texas bombings has been identified.

The suspect was identified as Mark Anthony Conditt, reported The Associated Press.

Pflugerville is a suburb of Austin.

Previously, law enforcement officials had only identified the suspect as a 24-year-old white male.

Surveillance teams located Conditt in Round Rock, right before he began driving on Interstate 35, reported CBS.

But as SWAT officers approached his vehicle, he detonated a bomb inside.

The death will be investigated by the Austin Police Monitor and the Texas Rangers.

The suspect set off a string of five bombs in the Austin region, killing two people and leaving six others injured.

The bombs were set inside packages and delivered to people’s homes.

First Austin bombing victim was Anthony Stephan House. Was going to take his 8 year old daughter to school when bomb exploded. His family have set up a gofundme to help pay for his daughter’s education https://t.co/aoMCSOM3yz

Austin bomb suspect blows himself up in police confrontation https://t.co/k4qDj9mGQA via @nbcnews

The bombs were set off in the past three weeks, starting on March 2.

Police officers warned the public that there may be more bombs out there that were set before the suspect’s death.

The last bomb was sent from an Austin-area FedEx store.

Surveillance footage from the store led police officers to the suspect.

“We don’t know where this suspect has spent his last 24 hours and therefore we still need to remain vigilant to ensure that no other packages or devices have been left to the community,” Austin Police Chief Brian Manley said at a news conference early Wednesday morning, March 21.

President Donald Trump congratulated the law enforcement officers for their action via Twitter.

“AUSTIN BOMBING SUSPECT IS DEAD. Great job by law enforcement and all concerned!” he said.