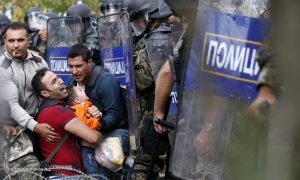 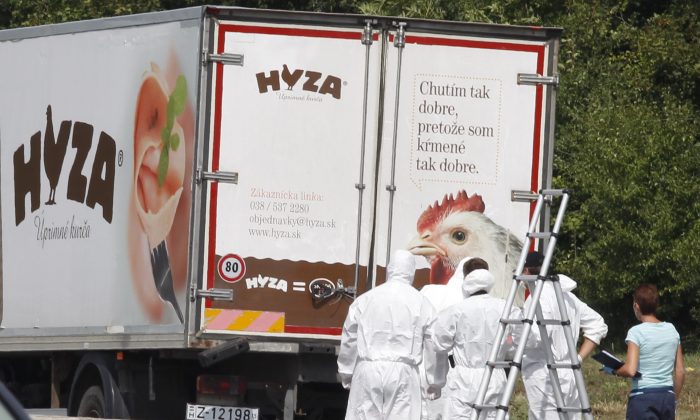 Forensic officers in front of a truck inside which were found a large number of dead migrants on a motorway near Neusiedl am See, Austria, on Thursday, Aug. 27, 2015. (Dieter Nagl/AFP/Getty Images)
Europe

VIENNA—As regional leaders met Thursday to tackle Europe’s refugee crisis, a gruesome discovery unfolded a short drive from the Austrian capital: An abandoned truck was found with at least 20 — and possibly up to 50 — decomposing bodies of migrants piled inside.

It was the latest tragedy in a year that has seen tens of thousands of people risking all to seek a better life or refuge in wealthy European countries. German Chancellor Angela Merkel said at the Vienna conference she was “shaken by the awful news,” and summit participants held a minute of silence.

“This reminds us that we in Europe need to tackle the problem quickly and find solutions in the spirit of solidarity,” Merkel said.

Migrants fearful of death at sea in overcrowded and flimsy boats as they flee turmoil and war in the Middle East have increasingly turned to using a land route to Europe through the Western Balkans. But the discovery of the bodies in the truck on the main highway connecting Vienna to the Hungarian capital of Budapest showed there is no truly safe path.

Thousands cross from Greece daily with the help of smugglers, aiming to reach European Union countries like Germany, Austria or Sweden and apply for asylum. The human traffickers may charge thousands of dollars per person, only to stuff them into trucks and vans so tightly that they often cannot move — or breathe.

Austrian police declined to say what killed those found in the truck, pending an investigation.

The state of decomposition made establishing identities and even the exact number of dead difficult. Senior police official Hans Peter Doskozil said that “20, 30, 40 — maybe 50” corpses were inside.

The truck was towed to an air-conditioned location near the border with Hungary where authorities would open it once temperatures had cooled enough to begin removing the bodies, said Doskozil, the chief of police in Burgenland province east of Vienna.

Autopsies would be conducted in the capital later, he said.

Officials found the driverless truck shortly before noon on the highway shoulder about 25 miles (40 kilometers) east of Vienna, near the town of Parndorf, and they originally believed it had mechanical trouble, said police spokesman Helmut Marban.

Then they saw blood dripping from the cargo area and noticed the smell of dead bodies, he said.

Police quickly realized there were no survivors, Doskozil said.

Information from Hungarian police indicated the truck was east of Budapest early Wednesday and entered Austria overnight before being abandoned, he told reporters in Eisenstadt, the provincial capital.

The condition of the bodies indicated the victims may have died before the truck entered Austria, he added.

The truck apparently used to belong to the Slovak company Hyza, which sells chicken meat and is part of Agrofert Holding, owned by Czech Finance Minister Andrej Babis. Agrofert Holding, in a statement, said it had sold the truck in 2014. The new owners did not remove Hyza’s logos, and the company said it had nothing to do with the truck now.

News of the tragedy spread quickly to the thousands of migrants traveling on foot and by vehicle from Serbia into Hungary, a major entry point for EU asylum-seekers. They said they had heard stories before of smugglers lying to clients and dropping them far short of their promised destination or of abandoning them, sometimes still locked in trucks.

But they felt there often was little choice but to take such risks, given the physical toll of walking many miles on challenging — often guided only by a map on a smartphone.

Hassan El Ali, from the Syrian city of Aleppo, said smugglers can easily be contacted “face to face, but also through Facebook and Twitter.” The 31-year-old who was camped on Serbia’s border with Hungary said migrants used word of mouth to find “hidden pages and forums about how to cross the border between Hungary and Serbia.”

Hungary on Thursday deployed more police on its porous border, but refugee activists said the effort appeared futile in a nation whose migrant camps are overloaded and barely delay their journeys into the heart of the EU.

Police reported a single-day record of 3,241 detentions Wednesday, 700 more than the previous day, as they launched a new initiative to channel migrants to one of the country’s five camps using special trains. Under police escort, about 600 asylum- seekers boarded a train to be delivered directly to at least two migrant camps.

Others continued to cross Hungary’s 109-mile (174-kilometer) border with Serbia on foot.

At the Vienna summit, Austrian Chancellor Werner Faymann had just finished telling other European leaders that there was an urgent need to crack down on human traffickers when news came of the grisly discovery on the highway.

Participants fell silent for a minute in tribute, and Faymann invoked the tragedy as showing the need for quick solutions to deal with the torrent of migrants.

“Today, refugees lost the lives they had tried to save by escaping, but lost them in the hand of traffickers,” Faymann said.

Austrian Foreign Minister Sebastian Kurz floated elements of a five-point plan that foresees setting up safe havens in the migrants’ home countries where those seeking asylum in the EU could be processed and — if they qualify — be given safe passage to Europe.

Beyond safe havens, possibly protected by troops acting under a U.N. mandate, the Austrian plan to be submitted to EU decision-makers foresees increased controls on Europe’s outer borders and coordinated action against human smuggling. It also calls for refugee quotas for each of the EU’s 28 members — something that many countries have opposed.

“Never before in history have so many people fled their homes to escape war, violence and persecution,” German Foreign Minister Frank-Walter Steinmeier said. “And given the large number of unresolved conflicts in our neighborhood, the stream of refugees seeking protection in Europe will not abate in the foreseeable future.”

Amnesty International alleged that EU indecisiveness was partly to blame for the latest migrant tragedy.

“People dying in their dozens — whether crammed into a truck or a ship — en route to seek safety or better lives is a tragic indictment of Europe’s failures to provide alternative routes,” the rights group said a statement. “Europe has to step up and provide protection to more, share responsibility better and show solidarity to other countries and to those most in need.”

On Wednesday, the bodies of 51 migrants were found in the hull of a wooden boat off Libya by a Swedish rescue crew. The Swedish ship Poseidon was already rescuing 130 migrants from a raft when it got a call to assist the nearby wooden boat. The Swedes rescued 439 survivors from the boat and then found the bodies below deck.