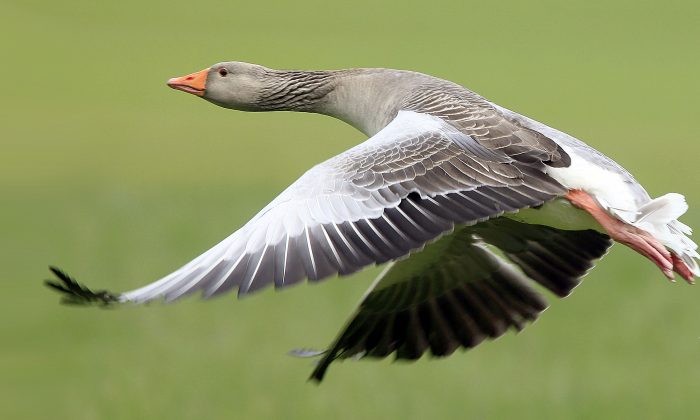 A Canada goose in flight. (Phil Inglis/Getty Images)
US News

A Maryland goose hunter ended up in the University of Maryland Medical Center’s Shock Trauma unit after someone in his hunting party successfully downed a Canada goose—on the hunter’s head.

Robert Meilhammer, 51, of Crapo, Maryland, was out hunting with three friends on the evening of Thursday, Feb. 1. The group was set up along the Miles River in Easton, Maryland, the Washington Post reports.

A flock of waterfowl flew over, and one of the hunters fired into the air, hitting at least one.

The stricken bird dropped from the sky and landed directly on top of Meilhammer. The impact knocked him unconscious.

Maryland Natural Resources Police said in a press release that Meilhammer suffered injuries to his face and head. Candy Thomson, a spokeswoman for the police, told the Post that the blow also knocked out two of his teeth.

His injuries were so severe that he had to be taken by ambulance to Easton Airport, from which he was airlifted to the University of Maryland’s shock trauma unit, CBS reports.

Canada geese can weigh up to 12 pounds; the Maryland Natural Resources Police said the bird fell some 90 feet. They told the Post that after the impact, Meilhammer knew who he was and “little else.”