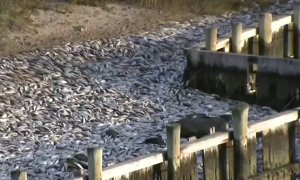 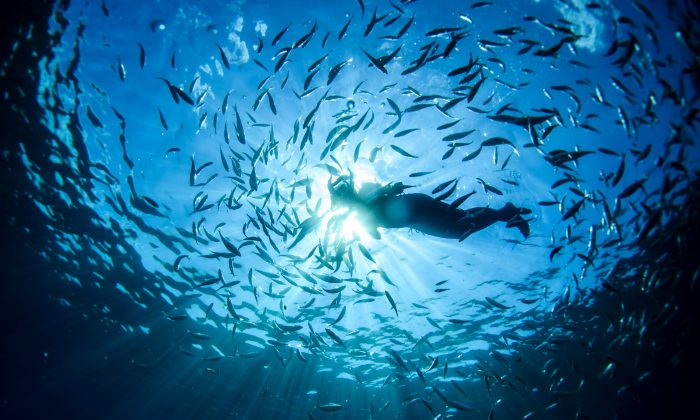 ‘Dead’ Fish Startles Woman as She Tries to Cut It

The unusual moment headless, gutless fish began moving has been immortalized on YouTube

It’s not entirely clear if the “moving” fish is a hoax, but many said it’s because the dead fish’s nerves are still active.

The video can be seen here (Warning: some profanity):

“I don’t believe that … his muscles are still moving; his muscles still work,” the man adds, saying it’s a bowfin fish.

“I am fighting him left and right to scale it,” the woman says.

A researcher with Penn State University took note of the viral clip, and noted that “although the brain and heart are not functioning, there are cells that can still respond to stimuli, for example, added sodium.”

“Immediately after death, muscle motor neurons (the nerves that create movement within the tissue), which are triggered by electrical signals, still contain some membrane potential (difference in ion concentrations). All cells are polarized, which means that there is a high-to-low gradient of charged atoms, or ions, from inside cells to outside them. The difference between these concentrations is what creates a charge across a membrane,” the researcher added.

Another Rare Fish Pulled Back From Extinction

What’s more, the phenomenon isn’t only present in fish.

“In fact, human corpses are also known to randomly move and jerk limbs for hours after death – although this is due to a different mechanism from that in the dancing squid,” the Penn State researcher says.

“Did you take the batteries out?” one person wrote.

“This fish kept fighting back and never stop. I approve that this fish had warrior spirit and barking ability,” said another.

Added another: “This fish got very good bluetooth connection.”

A viral video shows the moment raw chicken allegedly came back to life and fell off a table.

The footage was captured by Facebook user Rie Phillips, which saw more than 10 million views on the social media platform.

According to Phillips’s Facebook account, she’s from Florida, although it isn’t clear where the video footage was shot.

Because of the chopsticks, it would suggest the restaurant is Chinese, Japanese, Korean, or something similar.

Some users claimed the video was doctored, but other people said that the chicken movements were caused by nerve endings that haven’t yet died.

Other said that it wasn’t a chicken but another animal entirely.

Meanwhile, some claimed that the chicken was being moved by a string.

Piles of Dead Chickens Found Dumped Outside Massive Poultry Farm
As of July 25, the video has been viewed nearly 10.5 million times and was shared and “liked” hundreds of thousands of times.

One person said, “Muscles contract when salt or any stimulant like it is present, much like how worms start to go crazy after you put some salt in there.”

“I have no idea ‘wtf’ that is but it’s moving because the nerves are still active and basically twitching,” a second Facebook user claimed. “This is the same scenario with some fish when fresh, they tend to contract so it looks as if they’re still alive even though they’re already bisected.”

But most people expressed horror over what they had witnessed, with one saying, “I’m mindblown. This [expletive] looks crazy. I’m glad I’m not her.”