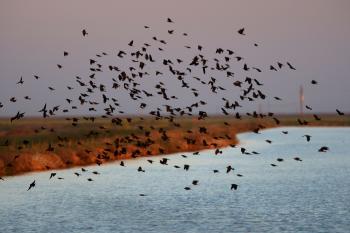 Blackbirds fly over an irrigation canal on April 17, 2009 near Firebaugh, California. (David McNew/Getty Images)
US

By Cheryl Casati
Print
Dead birds are falling from the sky again, but this time in a small town near Baton Rouge, La., where around 500 red-winged blackbirds and starlings were reported dead on the ground on Monday, according to WRBZ.

The news follows reports of mysterious mass bird and fish deaths in Beebe, Ark., on New Year's Eve, incidences that The Arkansas Game and Fish Commission called "unrelated," according to CNN.

In Louisiana, the dead birds were discovered in roads and ditches near a school, some clumped in groups, lying face down, or face up with wings outstretched and rigid legs pointing upward.

So far around 500 birds have been found, and they are the same types Arkansas reported—red-winged blackbirds and starlings, according to The Daily Citizen.

In Louisiana, State Department of Wildlife and Fisheries (DWF) biologists spent part of Monday gathering the birds. The birds are being sent for testing at labs in Georgia and Wisconsin.

Dr. Jim LaCour from DWF was unsure whether the events are connected.

"It's not common, (but) we do see a few die-offs for various reasons," he told WRBZ. "Yes, we need to look into it; we need to be a little alarmed; but it's not out of the scope of things to have a die-off."