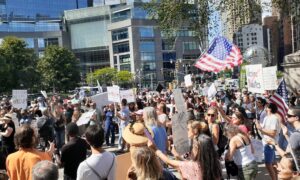 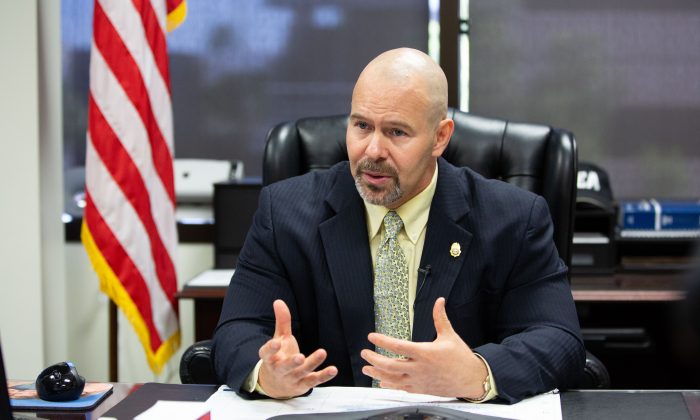 Arizona DEA Special Agent in Charge Doug Coleman at his office in Phoenix, Ariz., on May 24, 2018. (Samira Bouaou/The Epoch Times)
US News

More drugs than ever are being smuggled in, especially methamphetamines
By Charlotte Cuthbertson

PHOENIX, Arizona—The cat-and-mouse game has gone on for decades. The players have changed, and the communications are more sophisticated, but the game is the same.

Drug cartels in Mexico send as much illicit contraband, and people, into the United States as possible, while law enforcement agencies north of the border try to catch them.

The Tucson Sector in Arizona is one of the primary marijuana trafficking routes in the country for two different reasons, said Doug Coleman, special agent in charge of the Arizona Drug Enforcement Administration (DEA).

First, a lot of the terrain is remote, unpatrolled, and often unfenced, so marijuana can be more easily backpacked in. And second, the commercial port of entry in the small border town of Nogales is the entry point for about 70 percent of the winter produce trucked into the United States.

“We can’t possibly stop all those trucks as they are coming across because there are thousands of them … so it’s very hit-and-miss on what we can get and what we can’t get through that particular point of entry.”

Aside from the 18-wheelers, a lot of marijuana is backpacked in.

On the Mexican side of the border, 15 or 20 “mules” employed by someone who works for the cartel, will each load 50 pounds of marijuana into a burlap sack and cart it across in a remote area, Coleman said.

“They will get about eight to 10 miles inside the U.S. … to a major highway, and then a truck from Phoenix or Tucson will go down. They will run in, throw their loads in the back of that truck, and then they run back across the border.”

The truck then heads to Phoenix or Tucson to what the DEA calls a command and control center, where the load is re-packaged and re-distributed throughout the rest of the country.

The Sinaloa cartel controls the smuggling trade into Arizona, which shares 362 miles of border with Mexico.

“So if you are going to bring a load of dope in through one of those ports, you have to pay a fee to get it across, and then they control who comes and goes,” Coleman said.

A common technique is the “ant method,” in which a convoy of around five cars, each carrying 25 pounds of methamphetamine, drives through a port of entry.

In a snapshot issued this past March, Customs and Border Protection reported that on a typical day, it seized an average of 5,800 pounds of narcotics through the country’s ports of entry.

Coleman said the volume of drugs coming into the United States is higher now than he has seen in his 30-year career at the agency, especially methamphetamine.

“Drug trafficking ebbs and flows. Different drugs get popular then they go out of style and then new drugs come onboard,” Coleman said.

“You can always tell what’s going to happen in the rest of the country by what we start seizing. We started to seize more heroin several years before the widespread opioid epidemic.”

Fentanyl, a synthetic opioid that is 50 to 100 times more potent than heroin, has primarily been manufactured in China. However, that’s also changing.

“Mexican cartels are just buying the precursors now, and they are manufacturing fentanyl in Mexico,” Coleman said.

The DEA still finds tunnels linking Mexico to the United States, but far fewer than 15 years ago, said Coleman.

“Building a tunnel is a very painstaking process and you’re putting a lot of investment and time into something that could be shut down very quickly,” he said.

Several years ago, the DEA was informed of a tunnel project that was going to pop-up in a warehouse in Yuma, Arizona. The agency got its informant to rent the warehouse, and after the cartel spent nine months digging the 200-foot tunnel, it sent its first load through—100 pounds of methamphetamine. The DEA was there to meet it and the tunnel was closed down.

The DEA isn’t so much focused on drug interdiction, however. Its real work is in taking down the kingpins.

“My guys here conduct very high level, complex investigations where we not only find the cell head that is operating in Phoenix or Tucson, we track back to Mexico to find the cartel member and we expand our case to Philadelphia, Chicago, New York, wherever that is, where the drugs are ultimately ending up,” Coleman said.

Cartel leadership is very sophisticated, he said. They carry 15 to 20 different cellphones, they never let anyone buy from them that they don’t know and haven’t vetted, and they’re moving constantly “because we are always tracking them in Mexico.”

“When you get down to the lower levels and you get to the point where you are talking to a guy maybe here in Phoenix that is a load driver, that’s not particularly sophisticated. He gets paid $1,000 to take that load of coke back to Chicago,” Coleman said.