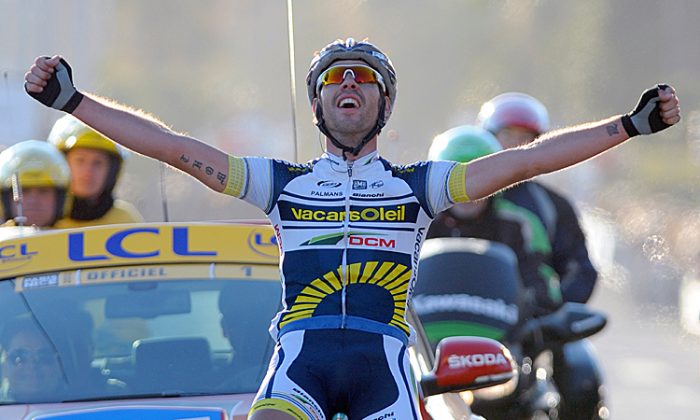 Thomas De Gendt of Vacansoleil-DCM joined Rein Taaramae of Cofidis in a break at the 48-km mark and stayed away while Taaramae faded, to bring Vacansoleil its third stage win of 2012 Paris Nice.

De Gendt cleared the day’s final climb, the Cat 1 Col de Vence, with 12 seconds on Taaramae and a 12-minute advantage over the peloton, which was not much concerned by either rider, as neither was a General Classification threat.

De Gendt won the stage by 11 minutes. Taaramae never caught the Vacansoleil rider; he crashed on the twisting descent but managed to take second, 6:17 behind.

“Taaramae was an ideal ally,” De Gendt told cyclingnews.com “On the Col de Vence he tried to drop me, but I felt so much stronger than him. At the moment, everyone on the team is in good form. It was a nice stage and a nice finish.”

Sky’s Bradley Wiggins kept himself surrounded by teammates near the front of the peloton. Wiggins was right behind the sprinters who fought for third, crossing the line with all his GC competitors.

The big loser of the race was Omega Pharma-QuickStep’s GC contender Levi Leipheimer. Leiphheimer crashed early, but got himself back to the front of the peloton, only to crash hard on the descent from Col de Vence.

After this crash, Leipheimer and his team had to take serious risks, as Movistar was setting a scorching pace at the head of the peloton, trying to gain time for Alejandro Valverde.

Catching the back of the peloton with four teammates, the Omega riders rounded a curve and found a police motorcycle guarding a fallen Lampre rider. Omega rider Dries Devenyns plowed into the bike and Leipheimer slammed Devenyns.

By the time both sore riders picked themselves up and retrieved their battered bikes, there was no real reason to chase; there simply wasn’t enough time left in the stage to catch the leaders. Leipheimer, who had ridden a perfect race and was only 11 seconds behinds the leader, had his race ended by three unfortunate accidents.

2012 Paris-Nice will be decided at the uphill time trial up Col d’Éze, exactly as Bradley Wiggins predicted halfway through the race. Wiggins would seem to be the certain pick; time-trialing and climbing are both strengths of the 31-year-old Briton, who started as a track rider and then a time-trial specialist in road cycling. Wiggins’ performance in the opening time trial shows his form; the best of his career, he said.

Mental preparation will decide the race. If Wiggins stays calm (hard to imagine him otherwise) and focuses on racing, he should take the win.

Vacansoleil has been having an amazing Paris-Nice, with three stage wins against the biggest names on the biggest teams of cycling. With Liuwe Westra only six seconds down in second place, there is a very real chance that Vacansoleil might win the whole deal.

Westra, like Wiggins, is a time-trial specialist who has learned to climb. Two years younger, so also two years less experienced, Westra has the physical skills—if he can hang mentally, he will make this a very close race.

Movistar’s Alejandro Valverde, lying third, is a very strong rider but possibly not as good a climber or time-trialer as Wiggins. He would have to make up 18 seconds on Wiggins; if Wiggins doesn’t crack or crash, Valverde doesn’t have much of a chance.