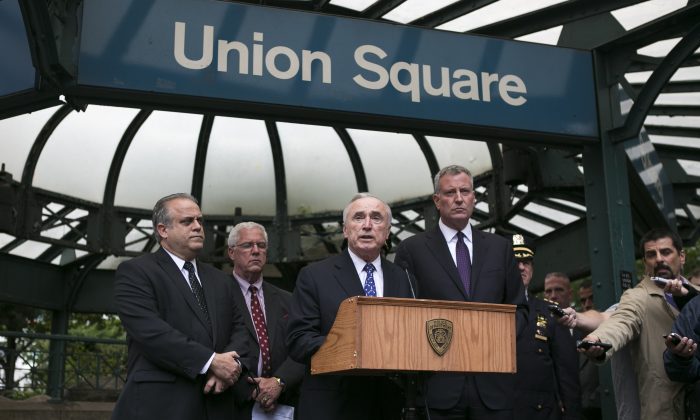 De Blasio’s Dilemma: What to Do With a Top Cop Who’s Smarter Than the Mayor?

New York first lady Chirlane McCray—if a city can have a “first lady,” as the mayor’s wife so grandly insists on styling herself—is probably right to upbraid her husband for hiring William J. Bratton as police commissioner. She is probably right to believe, as she reportedly said (but now denies), that “we can’t trust him.” But I am not sure she understands just how dangerous a powder keg her husband and she—his closest adviser, he boasts—are sitting on.

No doubt de Blasio thought himself extremely canny for appointing Bratton in the first place. The commissioner is a true urban-policy visionary, who, initially with the enthusiastic support of Mayor Rudy Giuliani, began the policing revolution in 1994 that, as maintained by his successors, reduced murders in New York from one every four hours in 1991 to fewer than one a day last year.

Bratton introduced a cornucopia of new techniques. He instituted quality-of-life policing, stopping such minor offenders as subway fare-beaters and public urinators on the theory that those who commit small crimes are much more likely than others to turn out on investigation to be bigger criminals as well, and that ignoring such disorderly behavior as aggressive panhandling or small-time marijuana sales is likely to suggest that no one is really in charge, emboldening evil-doers to commit bigger crimes. He began to stop and frisk people who looked like they might be carrying guns, with the result that he confiscated large numbers of illegal firearms, discouraged the ill-intentioned from carrying them, and made clear that the police, not the thugs, were in charge.

Bratton set up a computerized crime-mapping system—CompStat—so that he could put his cops where crime most often occurred and at the hours when it usually happened, with the result that ghetto neighborhoods that hadn’t benefited from policing for years finally got NYPD protection and revived once law and order reigned. CompStat was colorblind: In its algorithm, a crime was a crime, no matter the race or class of the victim or the criminal.

Bratton pushed authority down to his precinct commanders, but he used his trove of data to grill them in weekly meetings about the fluctuations in crime in their bailiwicks, holding them responsible not so much for solving crimes but for stopping them from occurring in the first place—a policing concept as revolutionary as suggesting the earth is round, not flat. He didn’t hesitate to demote captains who didn’t measure up. He created special units to combat drug gangs, fences of stolen goods, and chop shops that cut up stolen cars into parts that could be sold separately, understanding that crime is often a business and can’t operate without an infrastructure.

The resultant two-thirds drop in overall crime made Gotham come back to life. Once people felt safe in the streets, restaurants and theaters boomed, new businesses opened, dying neighborhoods gentrified, real-estate values shot up, and rich foreigners saw New York apartments as safe investments to keep their money out of the hands of kleptocratic regimes.

Appointing Bratton would help de Blasio square a circle: The new mayor could promise an end to what he charged was the “racial profiling” of stop-and-frisk—even though a smaller proportion of blacks gets stopped than crime victims identify as the perpetrators, and even though blacks compose a vastly disproportionate number of New York’s criminals and victims—while reassuring residents and businesses that Bratton’s experienced hand on the tiller would keep crime-fighting on course. He could even stage a press conference with Bratton sitting on his left and race-provocateur Al Sharpton (ex-boss of McCray’s top aide) on his right—the solution lying down with the problem, so to speak. And if things didn’t work out as planned, de Blasio could always do what Giuliani did when Bratton appeared to get too big for his britches: fire him.

But just what makes Bratton the ideal candidate to accomplish de Blasio’s mission is what makes him so dangerous to the mayor. Since serving as Giuliani’s police commissioner for two years after a stint as head of the New York Transit Police and the Boston Police Department, Bratton went on to lead the Los Angeles Police Department for seven years. In that sprawling, gang-infested city, utterly different from compact Gotham, not only did he cut crime by 54 percent, but he also improved relations between the LAPD and minority Angelenos. By the end of his tenure, four out of five blacks and Latinos told pollsters that his cops were doing a good job.

You don’t get that result without developing superb political as well as policing skills, and the suave Bratton appears to have gotten only smoother and more diplomatic over the years. (For the record, though as then-editor of City Journal I talked to him regularly during his last stint in Gotham, I haven’t spoken to him since his return.) So, while he has cut the number of stop-and-frisks, as de Blasio promised the NYPD would do under his mayoralty, Bratton has refused to end them—instead, he has weeded out some of the department’s worst bullies and has trained his remaining cops to do stop-and-frisks with better targeting and more tact.

Just as he increased the proportion of minority officers during his tour in L.A., he promoted Philip Banks III to First Deputy Commissioner, a post that Banks abruptly resigned, reportedly because he believed, perhaps rightly, that he’d be a token black dignitary with more prestige than real power. And since McCray, the mayor’s wife, reportedly had favored Banks over Bratton to head the NYPD, a tempest in the tabloids has erupted. In response, a recent New York Post front page showed de Blasio and Bratton making nice.

Here’s what I think is de Blasio’s dilemma: If he pushes Bratton to police so ineffectively that crime is likely to rise, Bratton will refuse and either quit, with noisy predictions that crime will rage out of control, or let the mayor fire him, unleashing the same loud predictions, which the tabloids will amplify. And crime will go up, unnerving now-complacent New Yorkers. And that will make Bratton de Blasio’s most likely challenger in the next mayor’s race.Myron Magnet, City Journal’s editor-at-large and its editor from 1994 through 2006, is a recipient of the National Humanities Medal. His latest book is “The Founders at Home.” This article originally appeared on the Manhattan Institute’s City Journal website.