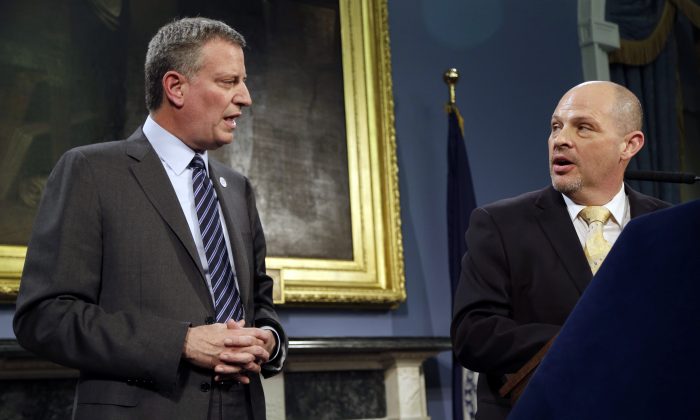 NEW YORK—Mayor Bill de Blasio has never been shy about his liberal economic outlook. In his inaugural address, the mayor promised to “take dead aim at the Tale of Two Cities” with social welfare programs to bridge the gap between the rich and the poor in New York City.

The mayor’s record in office thus far has shown abundantly that he is a man who keeps his promises. The city has procured $300 million for universal pre-kindergarden, worked with banks to develop $350 million worth of affordable housing, expanded sick leave for hundreds of thousands of workers, and an emergency room is still operating at the Long Island College Hospital, which de Blasio vowed to save long before he became mayor.

However, the longer de Blasio has governed and the more he spends to curb inequality, the more frequently he swears by fiscal responsibility—but this promise is already shaping up as a long-term test of whether de Blasio is a man of his word.

During his presentation of the 2014 budget—which, at $75 billion, is $5 billion higher than last year—the mayor said that “being fiscally prudent” is in fact a “necessary” trait of an “honest progressive.” He called the budget a “cautious document,” and quoted FDR that “too often … liberal governments have been wrecked on the rocks of loose fiscal policy.”

These odes to thrift are natural for a mayor trying to quell concerns about excessive spending. This year he has settled thorny multi-billion dollar labor contracts with 62 percent of municipal unions contracts that had expired in the Bloomberg years, and some critics are charging the agreements are too generous to labor.

Yet the budget needed no tax hikes, and many fiscal watchdog groups have conceded that de Blasio has balanced well the usual antipodes of expansive social welfare and fiscal prudence thus far. But the negotiations haven’t been all smooth sailing, and the path ahead looks especially bumpy.

De Blasio still has more contracts to settle, including with police officers and other uniformed employees unions, which have expressed hostility to the bargaining pattern set by the previous agreements this year.

The city settled a contract with the 691-member United Probation Officers Association last Friday, but the UPOA was the union reportedly most likely to negotiate. On Tuesday, the head of the Sergeants Benevolent Association said that it’s likely he’ll refuse the city’s contract offer.

“We can go down the path of binding arbitration and I kind of see that coming,” SBA president Ed Mullins told Capital New York on Tuesday. “There’s no way we can accept a zero,” he said, referring to the 18-month wage freeze pattern set by previous labor contracts this year.

Historically, the police unions have received favorable terms from the Public Employment Relations Board when negotiations go into arbitration, says Maria Doulis, a senior researcher at the Citizens Budget Commission.

“Typically the uniform unions have made the case they’re underpaid relative to the police in surrounding jurisdictions, and they’ve gotten rewards relative to civilian unions,” said Doulis. “There is a financial risk to the city, [because] you’re looking at a situation where they’re obligated to pay a greater reward than what’s been budgeted.”

The $13.4 billion allotted in the budget to settle with the city’s 152 unions assumes that all contracts follow the pattern set in the deal with the United Federation of Teachers—10 percent raises over seven years. Just 2 percent in extra raises for the city’s 35,000 uniformed employees could cost $190 million, according to Citizens Budget Commission estimates.

“The Sargeants are a small union in of themselves, but [other police unions are] adherents to this pattern,” Doulis explained. “Whatever they would get in the arbitration panel, it will have this ripple effect, because other unions will get that as well.”

The 2005 arbitration award to the Patrolmen’s Benevolent Association produced such a ripple effect, as the two 5 percent wage increases it received “became the pattern for the rest of the uniformed forces for the 2002-2004 round of collective bargaining,” according to a 2013 CBC report.

Ballot counters sort and scan votes on the United Federation of Teachers contract in a basement of a Lower Manhattan building June 3. (Benjamin Chasteen/Epoch Times)

The cost of labor contracts—projected using the pattern set by the first deal the city made—has already strained the budget to the extent that the city has had to resort to accounting legerdemain that skirts the edge of legality.

For instance, in the $9 billion, 9-year contract with the United Federation of Teachers, the $3.4 billion in retroactive pay raises is scheduled for payout through the 2021 fiscal year, with most of it concentrated in the last three years.

Conservative critics have accused this move as violating the city’s balanced-budget laws—established in the 1970s after the city pulled itself from the brink of bankruptcy—and the mayor has even faced rebuffs from fellow Democrats.

“The fiscal crisis [of the 1970s] was a very powerful moment, from that point forward the city has had a culture of fiscal accountability that is very strong,” said Doulis. “The budget has to be balanced under very strict accounting principles.”

In May, the administration was forced to amend the initial $73.9 billion budget proposal to include $725 million in backdated raises for teachers eligible to retire this July in the 2015 budget, after the city comptroller’s office argued that the initial budget violated GAAP—Generally Accepted Accounting Principles.

“Accounting procedures are, by definition, an area where there’s some natural and respectful disagreement about particulars,” the mayor said, in defense of the initial proposal. “But there’s more than one way to do things appropriately, and we thought the original plan was appropriate.”

Accounting isn’t the only area where the de Blasio has pushed against established norms. Last week the mayor pushed through the city council a measure to give $42 million to school bus companies to cushion drivers’ wages.

“The state constitution prohibits New York City from giving money directly to a private corporation, unless there is a predominant public purpose,” Manhattan Council member Daniel Garodnick, a Democrat who voted against the measure, said in a statement.

Garodnick said that measure didn’t meet that requirement because supplementing salaries was “a predominantly private purpose,” and would set a “bad precedent” by encouraging other companies to underpay their workers.

The administration took the $42 million from “a contingency fund for blizzards and strikes,” according to the New York Times, in line with the pattern set in the budget, where $1 billion was taken from the Health Stabilization Fund to pay for union contracts.

More concerning about the contracts is that it hasn’t been entirely established how they will be paid for. In the budget, $3.4 billion of funding comes from planned “healthcare savings,” the specifics of which have yet to be revealed, although plenty of suggestions were made when the UFT deal was announced.

“We’re looking for things like more effective delivery of healthcare that would include, perhaps, radiology and blood work done centrally and not in a doctor’s office, central purchasing of prescription drugs, centers of excellence for providing services,” City Labor Commissioner Bob Linn said on May 2.

In the letter to Citizens Budget Commission on June 2, Linn responded to skepticism of the projected healthcare savings by enumerating ways to “fundamentally bend the curve” of rising healthcare costs, to no avail.

“The measures are a collection of one-time or temporary savings such as artificial rate caps or adjustment to the City’s contribution to the Health Insurance Stabilization Fund,” CBC president Carol Kellermann wrote in her reply.

Kellermann also pointed out that the “savings” are calculated such “it is possible to attribute savings derived from shifts in national and regional trends in the overall healthcare inflation.”

The comptroller’s budget analysis identified that because the executive budget overestimated the rate of healthcare costs, $1 billion of the healthcare “savings” would transpire due to a slower rise in costs than projected; in effect, the savings from slowing healthcare costs were transferred to cushion the union contracts.

Linn could could not immediately be reached for comment.

A major obstacle to de Blasio’s fiscal regime is that, as mayor, he lacks the power to raises taxes apart from property ones. With his practice of dipping deep into reserve funds in good times, it’s hard to see how the city will keep afloat in a recession without deep cuts in spending.

When he tried to pay for pre-K by hiking taxes on those earning between $500,000 and $1 million by an average of $973 annually—or as de Blasio put it, “the cost of a small soy latte at your local Starbucks” a day—Gov. Andrew Cuomo was there to stop him.

With a 28-point lead over his Republican challenger Rob Astorino, it doesn’t look like the incumbent governor is going away any time soon.

“The city is in a moment of economic recovery, the big question is how long that will continue, we know we have this cyclical economy, are we prepared the next time things go down? That’s one question,” said Maria Doulis.

“There’s no surplus, there is $2 billion in Retiree Health Benefits Trust, that could be it potentially.”