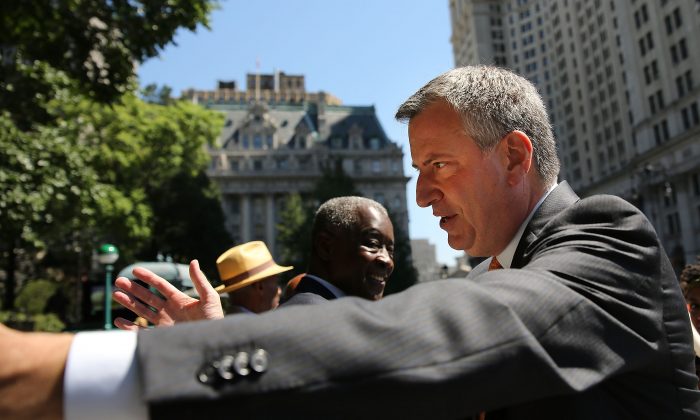 De Blasio Will Not Appeal Stop-and-Frisk Ruling If Elected

NEW YORK—Democratic mayoral candidate Bill de Blasio said if elected, he would not continue an appeal in the Monday, Aug. 12 stop-and-frisk ruling.

“As mayor I would not appeal this case,” de Blasio said at an endorsement press conference in Times Square.

On Monday morning, Federal Judge Shira A. Scheindlin ruled the practice of stop-and-frisk violated the rights of minorities, and she ordered a federal monitor to oversee the NYPD.

“I would work with the judge and the monitor to make sure we make changes necessary in the NYPD,” said de Blasio.

The city will announce its plans for an appeal at a 1 p.m. press conference.

De Blasio took the opportunity to admonish Bloomberg, as well as Speaker Christine Quinn, for their role in the seven-fold increase in the police practice of stop-and-frisk over the last decade which stops and searches people on the basis of suspicion of a crime, or the matching of a suspect’s description.

“The courts have just affirmed facts that too many New Yorkers know to be true: under the Bloomberg Administration, with the acquiescence of Speaker Quinn, millions of innocent New Yorkers—overwhelmingly young men of color—have been illegally stopped,” de Blasio said. “If we had gotten our house in order in the last few years, this would not be happening.”

De Blasio said the increase happened under Quinn’s watch in the City Council, which he believes had authority to enact change.

The City Council passed two bills to help reform stop-and-frisk on June 27. One bill would create an inspector general to oversee the NYPD, and the other would expand the racial profiling laws and allow citizens to sue.

The mayor vetoed the bills and the Council is set to override the veto on August 22 as long as it can retain each of its 34 votes.

De Blasio, the only candidate who supports both Council bills, said today’s court ruling simply affirms the need for the inspector general, even with a federal monitor.