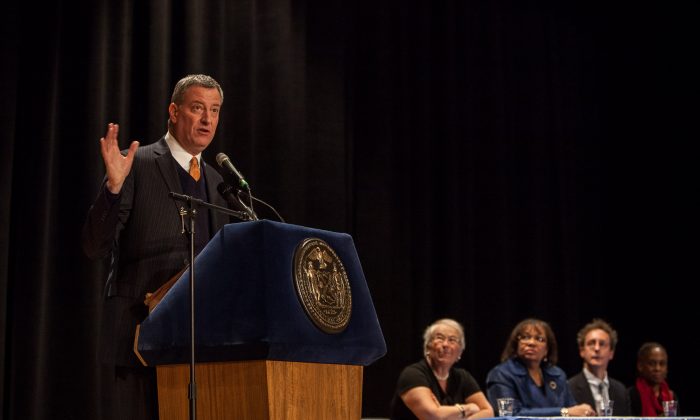 The state owes the city over $6-billion as a result of a lawsuit won by the nonprofit, Campaign for Fiscal Equity (CFE) in 2006.

After the state had agreed to raise education aid to the city, it backed out due to the recession. Now it seems the state is doing better as Governor Cuomo even promised to give a blank check for New York City to fund its universal prekindergarten plan.

“If Albany has money to throw around,” de Blasio said, “then let’s do it this way: I asked for and expect to see an agreement to tax the wealthiest New Yorkers so we can have full day pre-k and we can have after-school for every middle school student, and then, with the money you owe to the Campaign for Fiscal Equity, they can give us a down-payment so we can start reducing class sizes.”

De Blasio singled out kindergartens as the first that would reduce their classes in size. However, the tax increase, yielding some $500 million annually, still needs to be approved by the state’s legislature and it may face resistance from the Governor who is proposing his own pre-k plan.

The Mayor further promised less emphasis on standardized testing—a hard task to accomplish, as most tests are mandated by state and federal law.

He also suggested giving greater autonomy to the Panel for Educational Policy (PEP)—a decision-making body of the Department of Education (DOE) with the majority of members appointed by the mayor.

During the Bloomberg administration the panel did not contest the mayor’s decision. De Blasio said his PEP would listen to people in its meetings and that the panel would “not always be … a rubber stamp.”

DOE Chancellor, Carmen Farina, asked principals for suggestions on how to improve DOE functions, such as how to eliminate unnecessary paperwork or how to enable parents to help improve schools.

Both de Blasio and Farina repeatedly praised the principals for their hard work and assured them they are appreciated.

“This is like a breath of fresh air to me,” said Jose David Jimenez, Principal at the Manhattan Center for Science and Mathematics. He said the principals feel energized having their efforts recognized.

He also felt like their basic needs are being addressed, mentioning an announcement at the meeting that principals’ email boxes will be enlarged—seemingly a detail that received the longest applause.

He was satisfied with the administration’s focus on early education up until middle school. He said even as a high school principal, it’s the main concern for him because his students are shaped by the system. “I spend a lot at what they’re not getting at middle school,” he said.

Sharon Hill, Principal at P. S. 290, an elementary school in Manhattan, was more modest in her sentiment. She said the meeting made her feel like “the schools are really thought about.” As for the suggestion of reducing the sizes of classes, she said she would “of course welcomed it” since it’s a citywide issue.

The meeting took place at the Brooklyn Technical High School in Fort Greene. A school, which de Blasio’s son Dante is attending. The school has hosted the annual meeting of school principals several times before.