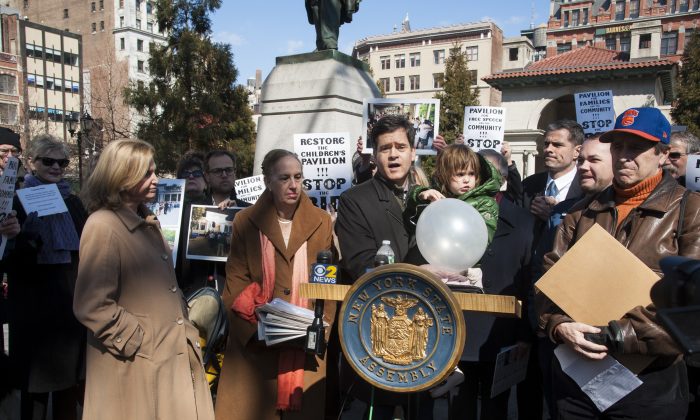 NEW YORK—The fate of a contentious plan to bring a restaurant into Union Square Park is now in Mayor Bill de Blasio’s hands. Local advocates and elected officials called on the mayor Sunday to void the restaurant’s concession license.

The proposed restaurant was approved during the administration of former Mayor Michael Bloomberg. The restaurant’s license was then challenged in a state court, but the judges decided in late February that it was a justified use for park space.

The restaurant would be located within an open-air pavilion at the north end of the park. It runs along a bustling neighborhood playground with high-end play equipment. The size of the playground was tripled as part of a $20 million Bloomberg-era renovation.

Opponents said that it would be the only bar and restaurant directly adjacent to a playground in a city park. They also believe the pavilion could be better used by children and community groups.

The Parks Department argued in court that it needs the revenue from the restaurant to fund park improvements.

In his role as public advocate, de Blasio expressed concerns about the restaurant. He now has the power to breach the contract with the concessioner. The city argued in court that the concession contract is like a license, something that the mayor could breach at any time for any reason.

De Blasio’s office said on Sunday that the administration is reviewing all plans associated with the restaurant.

“The area around Union Square Park has the lowest amount of playground space, but the highest concentration of restaurants in the entire city,” said Geoffrey Croft of NYC Park Advocates. “There is no need for another eatery in a neighborhood when children in the surrounding area are desperate for more play space.”

The pavilion has previously been used to hold art and dance classes, yoga seminars, and rallies, among other activities. The current plan is to convert the space to a seasonal restaurant from mid-spring to mid-fall and open the space back to the community during the rest of the year.

“I’m for restaurants and parks, but not this one,” Brewer said at the park Sunday.

The restaurant, if de Blasio allows it to proceed, would be operated by Chef Driven Market LLC, a company owned by Simon Oren, the restaurateur behind the 5 Napkin Burger chain.

The restaurant’s license also gives broad control of the operations to the Parks Department, which has to approve everything from menu items, hours of operation, and prices. Under the current agreement prices range from $1.95 to $33.95.