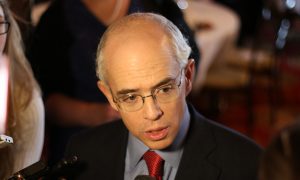 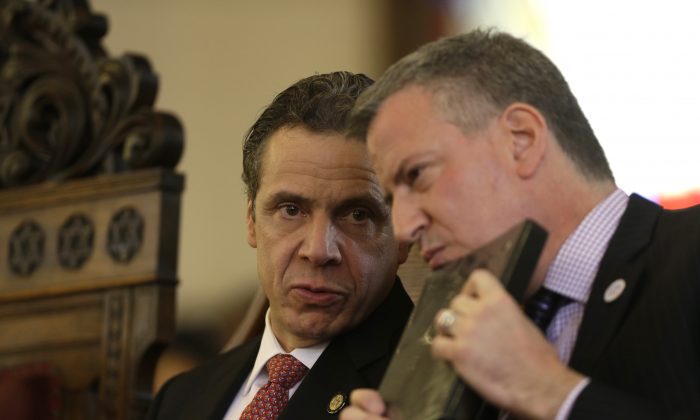 “I’m absolutely open to an alternative that gets the job done,” he said during Monday’s “Morning Joe” program on MSNBC, adding emphasis to the second part of the sentence. Yet he still maintained that his idea to increase income taxes on people earning over $500,000 is the best option.

The mayor, and the governor, who repeated his offer to fund pre-K with state funds again Monday, appeared to be moving toward a state funded solution.

Then in a dramatic turnaround, at 8:30 p.m., the mayor’s office released a statement praising Speaker Sheldon Silver and the Assembly majority for committing to “stable, sufficient and dedicated funding needed to ensure full-day pre-K for every child in New York City—as well as after-school programs for every middle-schooler.”

“Together, these legislators are standing up for our families and our future,” de Blasio stated.

The bill “authorizes the increase of tax by .75 percent on city taxable income greater than $500,000 to fund universal pre-kindergarten and after-school programs.”

In his budget proposal, Cuomo offered $1.5 billion over five years to fund pre-K statewide. That is less than the $1.7 billion de Blasio planned for the city alone.

But the governor repeatedly said he has whatever money pre-K will need.

“Forget the numbers,” Cuomo said Monday on WNYC’s “Brian Lehrer Show.” “As quickly as cities can bring it online, we will fund it.”

He pointed out even the mayor’s tax plan wouldn’t be rock solid. “There’s nothing that says if you pass a tax you can’t undo the tax,” Cuomo said.

De Blasio said he would accept Cuomo’s offer if it guarantees enough money for five years, but despite their “very good conversations,” they weren’t able to find a common approach.

“We haven’t gotten to the point of a five-year plan that we could actually hang our hat on,” de Blasio said.

The rich tax would yield some $530 million, $340 million of which would serve to expand the city’s pre-K to full day service for all 4-year-olds.

The rest of the $190 million would double the seats of middle school after-school programs.

Multiple after-school providers told Epoch Times that their funding, both private and public, had declined in recent years and they have no way to expand their services without new money, despite existing demand.

Cuomo did not mention funding for the after-school part of de Blasio’s education plan.