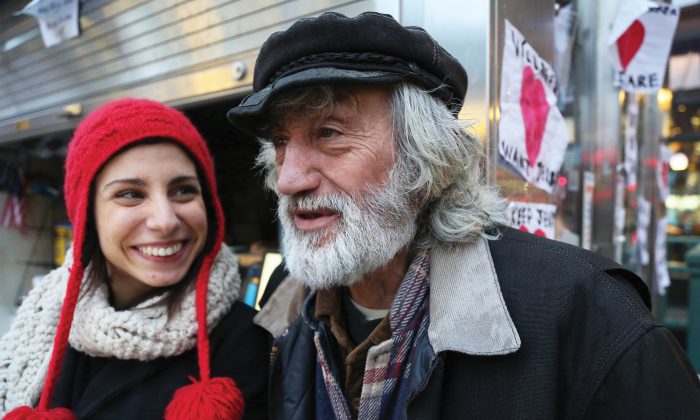 Jerry Delakas outside his newsstand at Astor Place as Nicole Cimino, maker of a documentary about Delakas's struggle to get his newsstand back, smiles at him, in Lower Manhattan, New York, on Jan. 14, 2014. (Ivan Pentchoukov/Epoch Times)
New York

NEW YORK—Jerry Delakas rolled up the gate of his newsstand at Astor Place Tuesday morning. The shelves were bare and there was nothing to sell, but he remained at the newsstand the whole day to celebrate an unusual victory against the snarl of the city’s bureaucracy.

Delakas’s newsstand was padlocked by the Department of Consumer Affairs (DCA) as the sun set on the Bloomberg administration in December. He had operated it without a license for decades and accumulated $37,000 in fines. The newsstand license was willed to Delakas by a friend, but DCA refused to transfer it after she passed away.

A sort of epic struggle ensued with petitions, community board meetings, a lawyer, a Facebook page, and a feature-length documentary about Delakas.

Delakas’s fight to win back his newsstand culminated shortly after a visit to Gracie Mansion and a meeting with a mayor who won a landslide campaign on a promise to end the Tale of Two Cities.

Mayor Bill de Blasio opened the doors of the mansion to the public on Jan. 5. Thousands, including Delakas, stood in line for more than two hours for a handshake and a photo with the mayor.

Their meeting was brief and productive. It was also the stuff of daydreams for public relations folks tasked with promoting the Tale of Two Cities. Delakas asked to have his life back, and gave the mayor a miniature cardboard newsstand.

The mayor told his team to deal with the case immediately, and in just over a week, Delakas is back in business, having to pay only a quarter of his fine.

“It’s the greatest gift of all times to begin the New Year,” said Delakas, who has traded at the site for 26 years.

Delakas, 64, has a strong Greek accent and a disarming smile. Although he lives on the Upper West Side, some say he is a pillar of the community at Astor Place. He wears jeans and has ruffled silver hair partly covered under a cap. He grows a beard when it’s cold and shaves it in the summer.

Delakas started working at the stand in 1987 when the license was owned by his friend, Katherine Ashley. He used to pay Ashley $75 per week to run the stand.

Delakas fought in the courts in 2012 to no avail. He continued to run the newsstand until officials locked it up in December.

“A lot of people in the community will help,” said Arthur Schwartz, Delakas’s lawyer. “I think that’s how he’ll raise the money.”

“We are glad we could reach an outcome that ensures Jerry’s will remain a part of this community for years to come,” Phil Walzak, the mayor’s press secretary, said in a statement.

Delakas has been a fixture at Astor Place for decades, weathering wind, rain, cold, and heat, “watching the life moving and the buildings growing,” he said.

Regulars often leave their packages with him to pick up later.

“People leave their house keys with Jerry,” said Kelly King, one of Delakas’s biggest supporters, who arranged his visit to Gracie Mansion. “If your friend is coming from Newark Airport, for example, but you’re at work, you can get them to pick up your keys at Jerry’s.” “He’s someone you can trust.”

Schwartz, Delakas’s lawyer, felt elated, and hoped that it was a sign of things to come in the new administration.

“We’re totally thrilled he’s back,” said Lisa Pakulski, a performing artist who has been a regular for 10 years. “He’s a cornerstone of the community. We’re singing in the rain!”

“[It was] a good domino effect—one thing led to another,” said Martin Tessler, a former member of the local community board. “De Blasio saw it our way, gave the license, and cut the fine.”

As a light rain soaked his hat Tuesday evening, Delakas continued to clean his newsstand. Police officers pulled over to congratulate him and passerby after passerby welcomed him back.

Nicole Cimino, who filmed “The Paperhouse Report,” a documentary about Delakas, lingered longer than the others. She spent more than a year with Delakas, cheering him up when he felt down about the long standoff with the city. The movie features intimate moments, including one where Cimino and Delakas hand-feed pigeons near the stand.

“It’s great to know that if you believe something and fight for it, you can do it,” Cimino said.