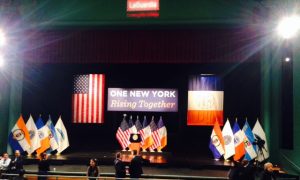 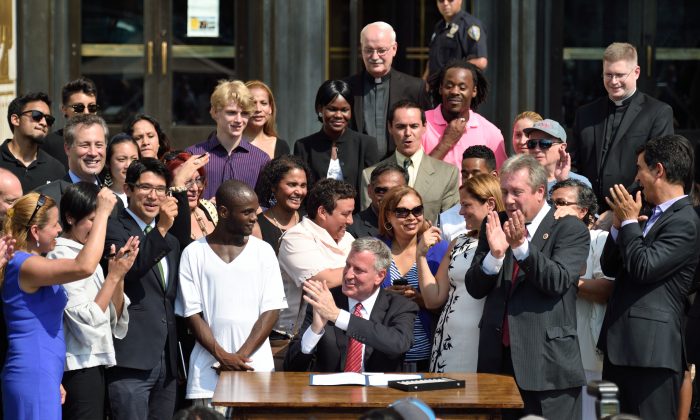 Cards will be free for one year
By Ivan Pentchoukov

NEW YORK—Mayor Bill de Blasio signed into law a bill on Wednesday that would create a citywide identification card program.

The cards will be free for the first year of the program. New Yorkers will be able to apply at locations in the five boroughs.

The program is specifically designed to provide identification cards to the city’s nearly 500,000 undocumented immigrants so that they can sign apartment leases, open bank accounts, and visit their children at public schools, among other things.

“This card is important for all New Yorkers,” de Blasio said. “But, for all those who don’t have ID, it’s going to be crucial.”

The mayor’s signature is the last legislative step needed to deliver on a promise he made in his State of the City speech in February. De Blasio said at the time that the cards will be available by the end of 2014.

Now the administration’s goal is to implement the program. The mayor’s offices of immigrant affairs and operations have been at work for months doing just that.

The Mayor’s Office of Immigrant’s Affairs has been preparing extensively to implement the program, and has reached out to more than a dozen city agencies, as well as community groups, libraries, the State Department of Motor Vehicles, CUNY schools, and other cities around the country that are running a similar program.

The outreach effort identified the Human Resources Administration (HRA) as the most suitable agency to run the program. HRA currently operates food stamps, Medicaid, and temporary cash assistance, among other programs.

To get a city ID card, people will have to submit several documents, similar to the point-based process currently in place at the New York State Department of Motor Vehicles. But the city will expand the list of documents eligible for points, so that undocumented immigrant can qualify. The administration plans to open at least one location in each borough to accept applications for the cards.

The cards will have a “distinct New York City branding,” and several security features including “holographic laminates, special cardstock material, and engraved text,” Mindy Tarlow, director of the Mayor’s Office of Operations, said in her testimony before City Council in April.

One of the biggest challenges, which officials are well aware of, is making the cards appealing to all New Yorkers and not just the undocumented immigrants. To make the cards worth getting, officials are considering adding a debit-card functionality as well as making the card a key to discounts at arts and cultural institutions, among other benefits.

The cards cannot be used for international travels.

The New York Civil Liberties Union issued a statement opposing the legislation, saying that it could expose the immigrants who apply for cards to prosecution and deportation by federal authorities.

“In this bill, the city has not done enough to protect those documents from being used by law enforcement. The NYPD, FBI, DHS and others can request these documents without having to show probable cause,” Johanna Miller, the advocacy director at NYCLU, said in a statement. “And if they are requested, the city has no obligation to even notify the person so they might be able to defend their own privacy.”

De Blasio said on Thursday that the information will not be shared with any agencies and that applicants will not be asked about their immigration status.