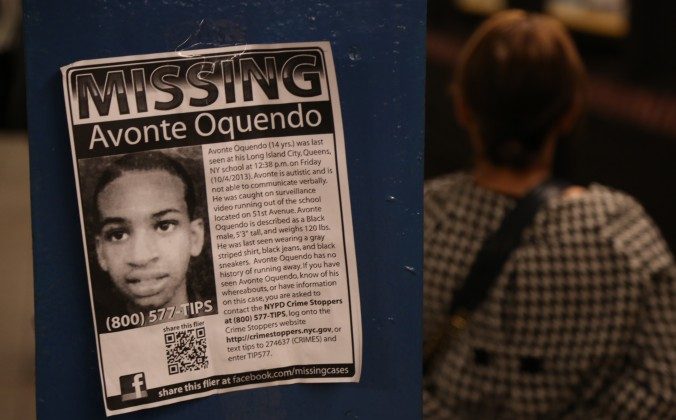 A poster of Avonte Oquendo, an autistic New York City teen found dead more than three months after he vanished from his school, posted at a subway stop, in Brooklyn, N.Y., on Oct. 16, 2013. (Christian Watjen/Epoch Times)
New York

NEW YORK—Mayor Bill de Blasio signed legislation into law on Aug. 7 that requires the Dept. of Education to evaluate the need for door alarms in elementary and special needs schools.

The law was introduced in response to the death of Avonte Oquendo, a 14-year-old autistic boy who left his school in Queens, undetected.

The law, known as ‘Avonte’s Law,’ requires the Dept. of Education (DOE) to evaluate the need for door alarms on exterior doors at schools serving students with special needs, and to complete its evaluations by May 30, 2015, according to a press release issued on Thursday. DOE officials must submit a report to the Council.

“Every parent in this city felt the urgency and fear as we searched week after week for Avonte…This legislation will protect other children from tragedy,” de Blasio said in the press release.

“The safety of our students comes first, and as a mother and grandmother, my heart hurts for Avonte’s family,” Schools Chancellor Carmen Fariña stated in the release.

“Today’s legislation is another crucial step to make sure every one of our students is able to thrive in a safe and supportive learning environment,” Fariña added.