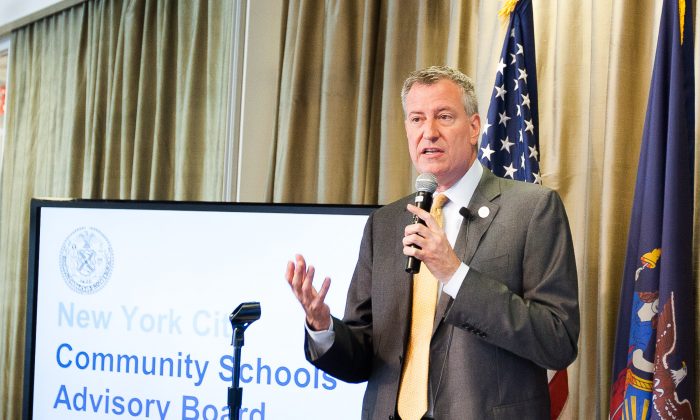 A community school is a strategy to provide additional services within a school building. It usually requires community partners, nonprofits, or businesses that bring in additional personnel to do tutoring, provide after-school activities, offer mental and physical health care, and provide workshops for parents.

The city has about 100 community schools, yet the majority of them don’t offer the full spectrum of services, such as medical care.

Last month the city formed a 50-member Community Schools Advisory Board that includes representatives of all possible stakeholders in the field, including nonprofits, city and state education agencies, health care providers, teachers, and parents. The board, meeting for the first time Thursday, was intended to provide input for how to make the mayor’s plan a reality. De Blasio said the resulting strategy would be released in the fall.

When implemented well, community schools improve attendance and the health of students; also the school atmosphere is better. They can also bring some academic improvements and help utilize school buildings after regular school hours. The downside is each costs about a million dollars a year.

This summer the city will start with 40 high-need schools and enough community organizations to serve them. With $52 million partly carved from the general state education aid and partly raised by the United Way of New York City charity, the schools are supposed to be able to launch their community programs during the 2014–2015 school year.

Schools principals will be required to explain their commitment to the program to get the funding, School Chancellor Carmen Fariña said. She said principals should find their own approach to the program to solve specific problems of their community, instead of just adding a few programs. She said some schools regard their enrichment programs as babysitting. “It can’t be,” she said. “We’re investing a lot of money and effort in this.”

De Blasio emphasized the mental health services community schools can provide, giving the example of Cincinnati, where mental health care was made readily available in schools, making it easier for parents to talk about mental health.

Yet there may be obstacles as school health centers are usually funded by Medicaid insurance, which has different levels of mental health coverage.

Some community schools solve the situation by providing the services regardless of insurance status, requiring the program to absorb the costs if unable to get reimbursed.

The mayor pointed out that the plan should also help with parent engagement. “Parents often feel they are not welcome in the school building,” he said. Community schools usually provide a space inside a school where parents can come anytime, have a workshop, or offer volunteer work.

According to multiple community school leaders, the model is heavily dependent on years of trust schools build with their communities.

Jane Quinn, director of the National Center for Community Schools at the nonprofit Children’s Aid Society, said the goal of 100 more community schools in four years is manageable.

The mayor said though, he doesn’t intend to stop with the hundred. “We wanted to set a number that we thought was important and ambitious, but a beginning,” he said.