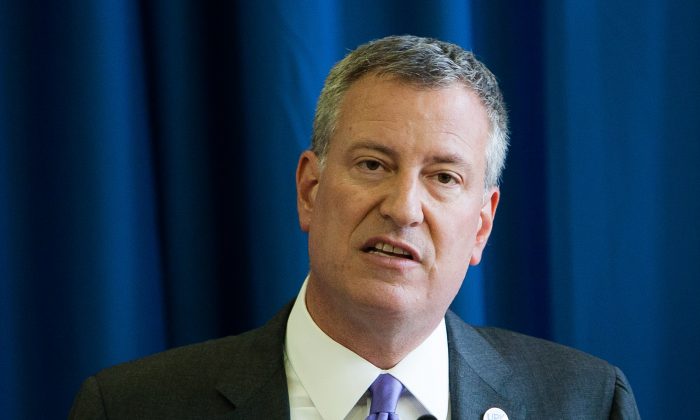 “I have not been satisfied in the past, especially in the previous administration,” he said. “I’m not satisfied, in fact, in my administration either that the urgency has been sufficient.”

After federal money for security cameras at public housing developments dried up in 2003, the New York City Housing Authority (NYCHA) has relied on year to year budget allocations. City Council has supported the project since 2012, paying for almost 4,000 cameras in 500 buildings.

But the installations have been lagging, even when funding is in place. De Blasio said that due to “unacceptable bureaucracy” NYCHA was “sitting on the money,” delaying cameras for 49 developments despite having $27 million from City Council for years 2013 and 2014.

Councilwoman Inez Barron, in whose district the crime scene occurred, said money was allocated for cameras in the Boulevard Houses almost a year ago, but nothing happened.

“Even as recently as March or April, they were still talking about where we’re going to put the cameras, which of course is important. But the cameras need to be put in,” she told the Daily News. “This is not the first time we asked what’s the delay. We’ve asked before.”

“The previous dynamic was unacceptable and we didn’t change it quickly enough,” the mayor said during an unrelated press conference in Brooklyn, just 2 miles from the crime scene. “All of those cameras must be in place by the end of 2014.”

“NYCHA is determined to get through this process quickly and is taking all of the mandated steps to move this forward,” the agency said Tuesday in a statement.

Since the surveillance project started in 1997, NYCHA installed almost 11,000 cameras in over 1,000 buildings, covering about 20 percent of the more that 2,500 residential buildings it manages.

Bronx councilman Andy King released a statement Tuesday calling for funds to install cameras at all NYCHA buildings, a $200 million plan, according to The New York Times.