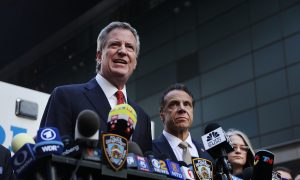 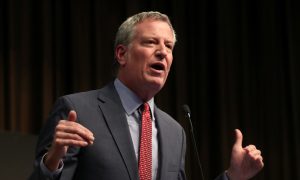 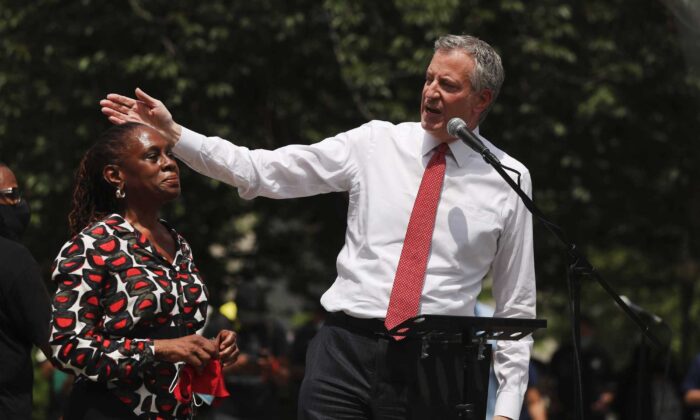 New York City Mayor Bill de Blasio on June 7 pledged to slash funding for the New York Police Department (NYPD) and redirect it to youth and social services, amid growing calls to “defund the police” following the in-custody death of George Floyd in Minneapolis.

De Blasio told reporters June 7 that he wants “people to understand that we are committed to shifting resources to ensure that the focus is on our young people.”

“While doing that, we will only do it in a way that we are certain continues to ensure that this city will be safe,” the mayor said during his daily briefing.

This morning we committed to move resources from the NYPD to youth and social services as part of our City’s budget.

Our young people need to be reached, not policed.

We can do this AND keep our city safe.

Following the death of Floyd, the 46-year-old Minneapolis man who died while in police custody after an officer knelt on his neck, and amid growing protests against police brutality, organizers of Black Lives Matter stated they want “a national defunding of police.”

De Blasio didn’t elaborate on the amount he intends to shift from the NYPD to youth initiatives and social services; he said the details will be worked out in the budget process in the coming weeks, ahead of the July 1 budget deadline.

The police department currently has an annual budget of $6 billion, which amounts to roughly 6 percent of the mayor’s proposed $90 billion fiscal 2021 budget.

“We’re committed to seeing a shift of funding to youth services, to social services, that will happen literally in the course of the next three weeks, but I’m not going to go into detail because it is subject to negotiation, and we want to figure out what makes sense,” de Blasio said June 7.

“I also will affirm, while doing that, we will only do it in a way that we are certain continues to ensure that this city will be safe,” he said.

News of the planned cuts to the NYPD also follows remarks from de Blasio in April that the city would be forced to cut expenses in the wake of the pandemic caused by the CCP virus, commonly referred to as the novel coronavirus, which has ravaged the nation’s economy.

The mayor said previously that over the next year, New York City—which became the epicenter of the pandemic in the United States—will be forced to cut more than $2 billion in municipal services, including the deployment of fewer police traffic agents at intersections.

Separately, the mayor has faced repeated calls from critics to place greater emphasis on providing funding to essential social services, with demands only growing following Floyd’s death two weeks ago.

In an open letter addressed to the mayor last week by Communities United for Police Reform (CUPR), 236 current and former de Blasio administration staffers urged him to reallocate NYPD funds to areas that include housing support and rental relief, food assistance, and health care, in alignment with the demands of the NYC Budget Justice campaign.

It comes as spending on the NYPD has sharply increased in recent years—by 22 percent (pdf), to $5.977 billion between fiscal years 2014 and 2019, according to New York City Comptroller Scott Stringer.

Manhattan City Council member Carlina Rivera said during a press conference last week that the city has a history of “prioritizing police funding over community needs.”

“It is absolutely shameful that in the wake of all of these protests, our mayor still claims the notion that the NYPD’s massive budget doesn’t play a huge role in the inequities and racism we see in this city,” Rivera said.

Saying “I hear you” is not enough. Here’s what I’m doing right now to make our city more just: pic.twitter.com/PoTu1xgxP2

In announcing the reforms on June 7, de Blasio pushed back against criticism from police unions, including the Police Benevolent Association (PBA)—the largest union representing NYPD officers—which has openly revolted against the mayor over NYPD reforms. PBA President Pat Lynch often issues statements condemning critics of police officers who use force.

“Anyone with eyes to see knows that I have made my views clear on the need to change the NYPD and have often incurred the wrath of certain union leaders and haven’t changed my views at all,” the mayor said. “I want to see more, faster, speedier, more transparent discipline when it comes to police.”

Biden, who has been supportive of demonstrators, said in an op-ed written for the Los Angeles Times that additional police oversight is needed.

De Blasio added on Twitter that cuts can be made to the NYPD while keeping the community safe.

“Our young people need to be reached, not policed. We can do this AND keep our city safe,” he wrote. “Giving young people positive options HELPS make this city safer.”