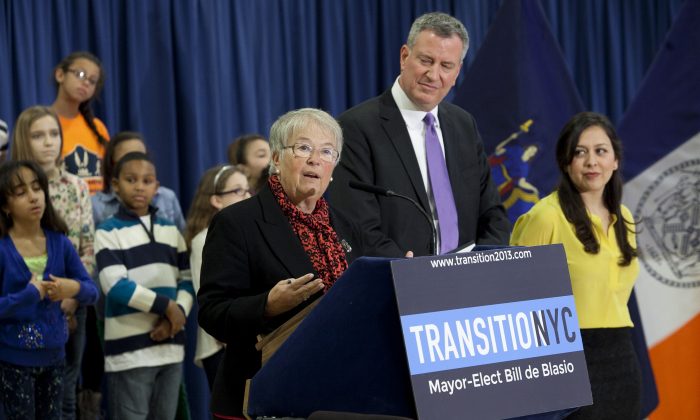 De Blasio made the announcement at William Alexander Middle School in Park Slope where both of his children attended and Farina was a superintendent.

The mayor-elect spent almost two months filling the top post at the Department of Education. De Blasio said the decision was “deeply personal” because his son Dante is still in the public school system.

“To me this is literally one of the most important decisions I will ever make as mayor,” de Blasio said Monday. “Taking on the lives of 1.2 million kids might be one of the most sacred missions that exists in government anywhere in this country, so I had to be 100 percent sure that not only was there enough talent, experience, and temperament but also the philosophy,” de Blasio said.

Farina has advised de Blasio since 2001, when he was a school board member and she was the superintendent of Brooklyn’s District 15.

Farina, 70, stepped out of retirement to take the job. On Monday she joked about giving up the sunny days in Florida, where she and her husband were set to retire. There had been rumors that, given her age, Farina would only be a temporary hire. She refuted the claim.

De Blasio campaigned on making drastic changes to the school system. He vowed to get away from standardized testing, charge charter schools rent, and issue a moratorium on school closures.

Farina will have to take measured steps to move from the Bloomberg model to the more progressive de Blasio model. She said she will sit down with the presidents of the parent-led Community Education Councils in each district to determine the needs and create an agenda to move forward.

“We will communicate frequently and explicitly,” Farina said. “It’s not just about us giving you our opinions, but about listening as well.”

Farina said she wants to work on professional development, bring back the arts and sciences, and collaborate with private companies to improve the school system.

Ursulina Ramirez, who served on the de Blasio transition team and in his public advocate’s office, will serve as Farina’s chief of staff.

Farina will take over the school system at a crucial juncture.

Outgoing Mayor Michael Bloomberg was elected on a campaign promise of being “an education mayor” and dramatically increased government spending on education.

But de Blasio campaigned against many of the policies that Bloomberg championed during his 12 years in office, such as closing schools that are deemed to be failing and boosting the growth of charter schools by giving them free space in public school buildings. De Blasio has also criticized the outgoing administration for being over-reliant on standardized testing.

The transition to a new administration is the first since Bloomberg won mayoral control of the schools in 2002, and it is unclear what changes de Blasio and Farina might immediately make in the middle of a school year.

Farina has held several posts within the city school system. She was once a teacher at Public School 29 in the Cobble Hill section of Brooklyn and later a principal at P.S. 6, a high-achieving school on Manhattan’s Upper East Side.

She de-emphasized using standardized testing as a major factor in measuring performance, a stance that clashed with the Department of Education’s central office. De Blasio has long railed against strictly “teaching to the test.”

Farina also created several new, small middle schools within District 15, a tactic de Blasio has praised. The district soon became regarded as one of the most innovative in the city.

Bloomberg has said his policies are working and should not be abandoned, announcing this month that the four-year graduation rate for the class of 2013 was a record 66 percent, up from 46.5 percent in 2005. “What is clear is that for the 12 years we’ve been doing this, the results are, by any national standards, outstanding,” Bloomberg said.