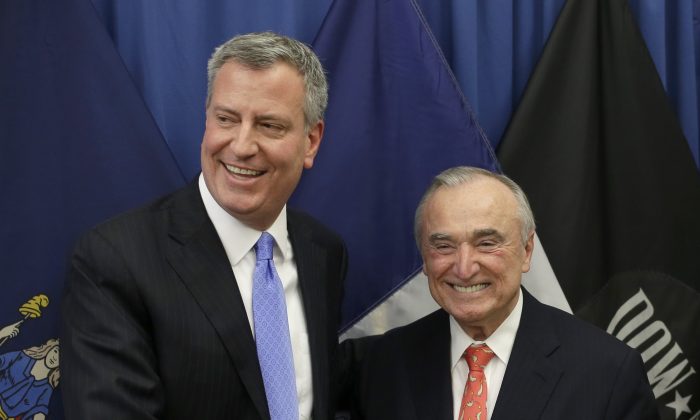 NEW YORK—Almost 20 years to the day, Bill Bratton accepted the job as police commissioner of the NYPD for the second time. The 66-year-old will serve under Mayor-elect Bill de Blasio, who made the announcement with Bratton Thursday.

De Blasio said he listened to his advisers carefully, including his wife, Chirlane McCray.

“This is one of the choices a mayor gets to make that is most pivotal for the people of our city,” de Blasio said. “This is one you make with all your heart, all your mind, and I have absolute confidence Bill Bratton is the right man for the job.”

Bratton, who, like the mayor-elect, is a Boston native, was beaming as he walked out with de Blasio to the press conference. He thanked his wife Rikki Klieman, who was seated in the front row next to McCray.

“I can’t express what it means to rejoin,” Bratton said.

Bratton will step into a position with high expectations. De Blasio made police reform, specifically reforming the department’s stop-and-frisk practices, a cornerstone of his campaign. The mayor-elect vowed to improve the tattered relationships between community and police, while keeping crime rates at record lows.

“He [de Blasio] is laying a lot on the line with this appointment,” Bratton said.

Like he did during his seven-year tenure at the Los Angeles Police Department (LAPD), Bratton will take over in a city with tensions between the police and community. De Blasio said that Bratton’s work in mending relations at the LAPD was a factor in his decision.

Bratton was at the helm of the LAPD from 2002 to 2009. He brought his community policing model with him, something he tried to implement under Rudolph Giuliani, who wanted nothing to do with it. Crime went down 54 percent during Bratton’s tenure. Bratton also mended the fences between police and the community, which had been broken for decades.

“He changed the culture of the department,” said professor Erwin Chemerinsky, founding dean of University of California Irvine School of Law.

Bratton improved the morale of the officers and ensured they followed the letter of the law, particularly in relation to how they interacted with the community, Chemerinsky said.

Bratton plans to apply the same community policing methods in New York City, which involve understanding the problems of each neighborhood and addressing them at the local level to prevent crime.

Bratton said he will use stop and frisk, calling it a necessary tool, but like his boss, wants to see quality stops.

Bratton did not shy away from giving his honest opinion of the current administration, currently run by Commissioner Ray Kelly—a man who he succeeded the first time around at the helm of the NYPD.

“We have a situation in this city at this time which is so unfortunate,” Bratton said. “At a time when police and communities should be so much closer together. … That is not the case in some of the communities in this city. That is unfortunate. But it can be corrected.”

Under Kelly’s leadership, police stops hit an all-time high of 685,724 in 2011, with 12 percent resulting in arrests or summons. Advocacy groups pushed for reform. In June, the City Council passed two reform bills: one installing an inspector general, and the second to allow citizens to sue the city if they feel they have been profiled.

A federal judge later ruled that the practice was being misused by the NYPD and ordered a federal monitor to oversee stop and frisk in the city. Mayor Michael Bloomberg sued to block the ruling.

During his campaign, de Blasio supported the council reforms and said he will drop Bloomberg’s lawsuit on the federal monitor, which could be installed as early as March.

Bratton worked under a federal monitor at the LAPD, which may prove useful, but his ability to mend fences will play a larger role in initiating the reforms de Blasio promised—a safe city where citizens are respected.

“Public safety and respect for the public are not contradictory ideas. They are complementary. They go hand in hand,” de Blasio said.

At age 9, Bratton picked up a children’s book from the Boston Library titled “Your Police.” It instilled in him the value of community and police relations at a young age. Bratton brought a worn copy of the book with him to the press conference in Red Hook, Brooklyn.

He read the last page of the book, which he said is his starting point of what policing should be: “We must always remember whenever you see a policeman, he is your friend.”

Bratton knows he will have to gain the trust of a leery public, which has endured 12 years of increasing tensions, but he is hopeful his method will work.

“If we get it right, if we make the city safe, and do it in the way the public trusts us, then the benefits of that are extraordinary,” said Bratton. “If we can do it right here, this is in many respects a beacon that can light the rest of the world.”