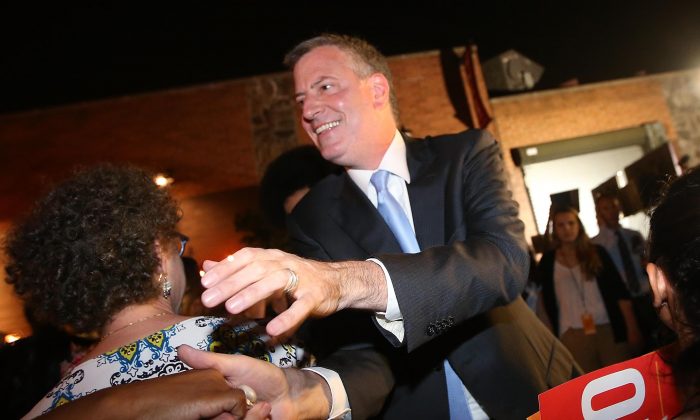 NEW YORK—In the hotly contested race for the Democratic nomination for New York City mayor, Bill de Blasio has come out on top with 40.01 percent of the vote, as of 11:39 p.m., and with 95 percent of the precincts reporting, according to WNYC.

However, former city Comptroller Bill Thompson polled second, with 26.26 percent to earn a place in a possible runoff, which will take place Oct. 1 if the final count shows de Blasio short of 40 percent. With paper ballots likely to take days to count and finalize, Thompson has not conceded the nomination to de Blasio.

“My friends, this is far from over,” said Thompson in a late-night speech.

The winner of that contest will face Joe Lhota, the Republican nominee in the Nov. 5 general election.

Council Speaker Christine Quinn has 15.22 percent of this vote. They were followed by current city Comptroller John Liu at 7.14 percent, and former Congressman Anthony Weiner at 4.94 percent.

In a concession speech at around 11:30 p.m. Quinn congratulated de Blasio and Lhota. “We took a lot of knocks, but I’m proud of the race we ran,” Quinn said. “Looking out at all of you tonight, I can’t help but feel optimistic about the future of our city.”

Often characterizing New York under Mayor Michael Bloomberg’s administration as a “tale of two cities,” de Blasio, the city’s public advocate, has presented himself as the man to ease the struggles of the middle class in all five boroughs to live affordably.

In his victory speech after midnight, de Blasio chided those who said his ideas were too bold. “Thinking big isn’t new to us [New Yorkers],” said de Blasio. “It’s why this place is great.”

“Finally a city that resolves the tale of two cities will be in the past, and the building of one city is in our future. We begin tonight,” added de Blasio, who did not mention the possibility of a runoff in his speech.

Among Democratic candidates, de Blasio did the best job of differentiating himself from Bloomberg. The current mayor is frequently criticized by left-leaning New Yorkers for making the city more friendly to business and the rich, and favoring development, while ignoring the struggles of the middle class.

Bloomberg was rated the 13th-richest man in the world by Forbes. He and de Blasio are strikingly different. While Bloomberg is a businessman, de Blasio has worked in government his entire career.

De Blasio lives in Park Slope, Brooklyn, with his wife and his two children, who attend public schools.

A graduate of Columbia University’s School of International and Public Affairs, de Blasio began his career as a staffer for former mayor David Dinkins. He then worked as a regional director under then-HUD Secretary Andrew Cuomo, where he worked to increase funding for affordable housing, according to his campaign website. In 1999, he worked for the Brooklyn School Board, where he advocated early childhood education. He then spent eight years on the City Council prior to becoming the city’s public advocate in 2010.

According to the preliminary results of an exit poll conducted by Edison Research, nearly three-quarters of New York City Democratic primary voters said the next mayor ought to move the city away from the policies of Bloomberg. About a third said they were seeking a candidate for mayor who “can bring needed change.”

De Blasio carried about half the vote among those groups, according to Edison, while Quinn held a broad edge among those who preferred to keep the city moving in Bloomberg’s direction.

Quinn took a lot of criticism from New Yorkers throughout her campaign for supporting the overturn of term limits, which allowed Bloomberg to run for a third term. This, and her siding with Bloomberg on key issues such as retaining Raymond Kelly as police commissioner, had Quinn looking too close for comfort to the outgoing mayor.