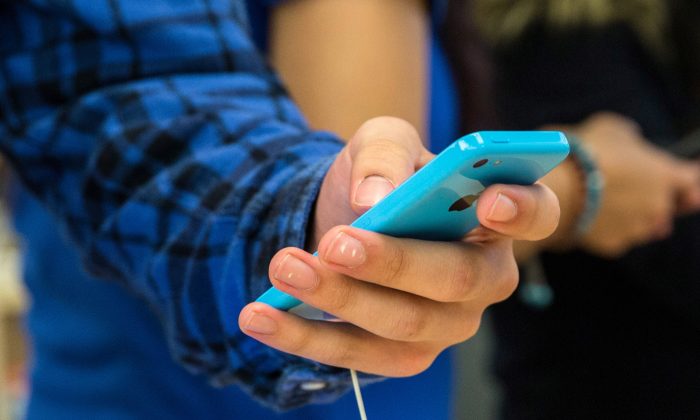 An iPhone 5C, one of the phones increasingly being stolen for high cash resale. (Andrew Burton/Getty Images)
New York

NEW YORK—Apple may have introduced its first phone with a fingerprint scanner in hopes of protecting consumers from theft, but that is not enough for Democratic mayoral candidate Bill de Blasio.

Acting in his capacity as public advocate Oct. 21, de Blasio sent a letter to the CEOs of all the major cellphone manufacturing companies. He is joining a coalition of officials around the globe who are demanding that kill switches be installed in all smartphones in the hopes of curbing the rising number of robberies of the popular devices.

“The CEOs named here are literally the people who have the power to solve this problem,” de Blasio said from New York City Attorney General Eric Schneiderman’s office Monday morning.

New York City has seen murder and shooting rates plummet in the last decade. However, as an increasing number of smartphones have hit the market, the number of robberies has also increased. Between Jan. 1 and Sept. 23, 2012, a total of 11,447 cases of stolen “iDevices” (iPhones and other iOS devices) were reported to the NYPD, an increase of 40 percent over 2011, according to a report issued by Schneiderman’s office.

Smartphones, which retail for hundreds of dollars, can fetch a pretty penny on the black market, with phones going on Craigslist and eBay for several hundred dollars.

“This is the new frontier, and what we have to deal with if we are going to protect public safety,” de Blasio said. “We have to do a better job addressing this issue.”

Noting the uptick in crime, Schneiderman created a coalition and sent letters to the manufacturers of smartphones in May calling on them to create kill switches for the phones. The software would allow a user to “kill” the phone remotely, much like people do already with stolen credit cards. The phone would be useless, and thus not worth the effort to steal, said Schneiderman.

Over the summer, his office hosted a smartphone summit, inviting all the CEOs to talk about the issue. While the dialogue was productive, no agreement was made.

Some have argued cellphone manufacturers have too much money to lose by creating the kill switch. When a user loses a phone they must pay full retail price, which for an iPhone can be at least $600, unless the device is insured. The industry makes $30 billion per year off replacement phones, leaving little incentive to change, according to Schneiderman.

The attorney general said he would use a twofold approach to persuade the companies to comply: public pressure, and legislation—which would ban the sale of products that do not include a kill switch. While nothing has been proposed yet, Schneiderman said it would have to be done on a large scale to be effective.

De Blasio said he prefers to get to the root of the problem, but, if elected, he believes his community policing strategy would help identify who is perpetrating the crime, resulting in decreases in the number of thefts.