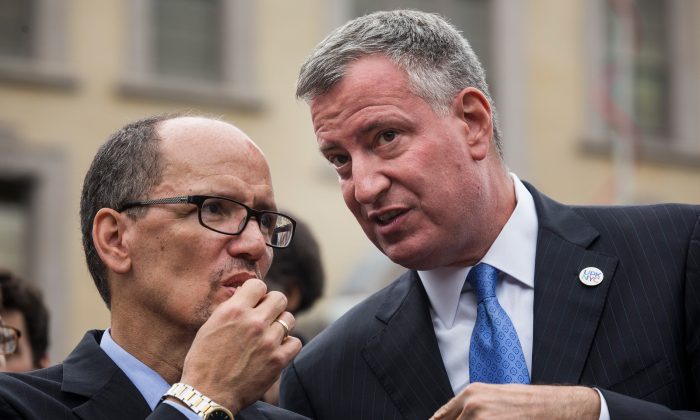 NEW YORK—Mayor Bill de Blasio has had to work overtime in the past few weeks. In between his regular duties and working to contain both the Ebola outbreak and the city’s panic over the virus, the mayor has pushed and pulled behind the scenes to secure control of the state senate by Democrats.

The Democrats currently have a majority in the senate, but in the past term the five-member Independent Democratic Caucus (IDC) and state senator Simcha Felder have caucused with Republicans, who have effectively governed the senate.

After challenges from the left in their primary elections, IDC members have pledged to cooperate with Democrats, but Republicans can keep the senate if they win two more seats in November, a real possibility given the number of competitive districts this year.

A Republican senate would be disastrous for de Blasio, as the bulk of his progressive agenda—acquiring rent control powers for the city and raising the minimum wage, for instance—depends on approval from Albany, which earlier this year denied de Blasio the soy-latte tax on millionaires he had highlighted in his inaugural address.

It’s no wonder that the mayor has gone the extra mile in the senate race. De Blasio has dispatched Jonathan Viguers of the city’s Community Affairs Unit to aid Democrat Justin Wagner’s senate campaign, an unprecedented move in recent years.

De Blasio has largely avoided stumping for senate candidates in person—in many swing districts upstate, the progressive mayor could be a liability rather than an asset by associating the candidate with the far left—preferring more indirect means of support.

A de Blasio fundraiser to elect senate Democrats solicited $50,000 in contributions from a city developer, who felt “uncomfortable” because he had deals that depended on approval from the city, according to the New York Daily News.

Supermarket billionaire John Catsimatidis contributed $50,000 recently to Putnam County Democratic Committee to show that he wanted to work with the mayor and the city, the report said, and the committee then transferred the funds into the campaign coffers of state senator Terry Gipson and senate candidate Justin Wagner.

The committee also received $100,000 from Alexis Lodde, a first-time donor and founder of MV Transportation, a Dallas-based company that holds bus contracts with the city through a subsidiary. In September, de Blasio had plowed $42 million into wages for private bus drivers who operated the city’s school buses.

Senate Democrats have also received support from the New York City taxi industry, which has contributed $31,000 to their efforts, according to the New York Times.

The city’s Taxi and Limousine Commission stifled the expansion of digital competitors like Uber and Lyft, which have decimated the taxi industry in cities with less transportation regulation like San Francisco.