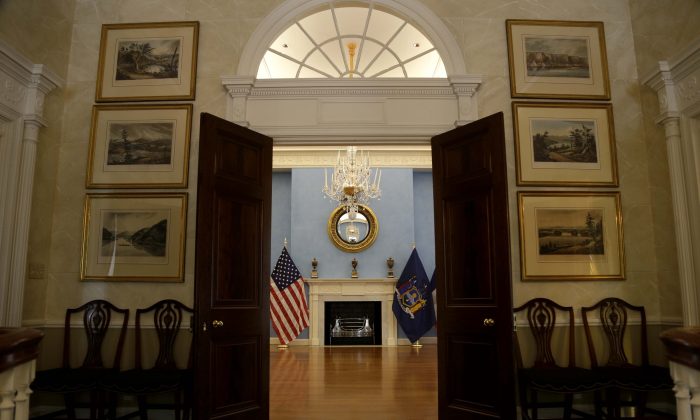 An entrance to the ballroom at Gracie Mansion in New York on Oct. 7, 2013. (Seth Wenig/AP)
New York

NEW YORK—Thanksgiving dinner may have been full of merriment at the de Blasio household, but it was not full of decisions.

Mayor-elect Bill de Blasio confirmed he had a family meeting over the holiday weekend to discuss the move to Gracie Mansion, but a decision on the move is not final.

“You will hear something later this week,” de Blasio said from City Hall Park on Monday afternoon. “There are still a couple of unanswered questions, a couple of details that have to be sorted but we will know before this week is out.

When pressed by another reporter if he was leaning a certain way, de Blasio took no position, reiterating an announcement would be made later in the week.

De Blasio would be the first resident at Gracie Mansion since 2001. Current Mayor Michael Bloomberg chose to stay in his posh Upper East Side home during his three terms, which will expire Dec. 31. The Mayor did, however, personally pay for $7 million in renovations to the porch, stairs, and bathrooms.