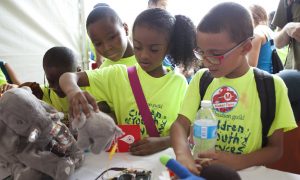 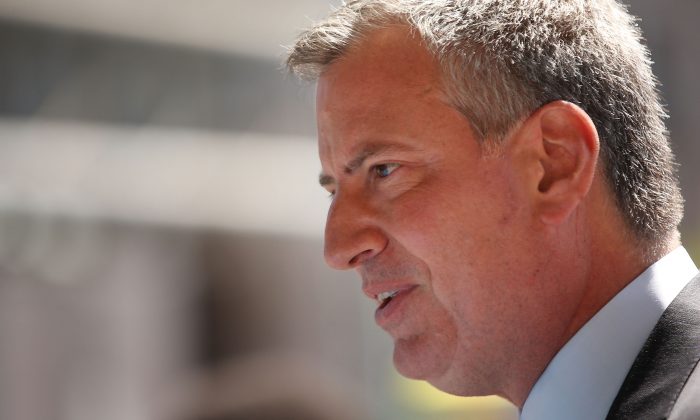 NEW YORK—Without the constraints of 90 second time limits like most mayoral forums, Democratic candidate Bill de Blasio expanded on his vision to reform the education system in New York City while speaking at Hunter College on Aug. 1.

De Blasio, who has enjoyed a recent spike in his poll numbers, vowed he would create 100 new community schools in his first term, provide resources for better principals, and create universal pre-kindergarten (pre-k) for every child in the city.

De Blasio’s progressive agenda is based largely on what he calls the “Tale of Two Cities.” He uses the Charles Dickens reference to describe the inequality of the city. De Blasio believes education is the key to solving the problem.

“More than in any point in human history, your level of education determines your economic destiny,” de Blasio told the crowd. “If we do not want to have a society ridden by inequality, we have to address the challenge of education more fundamentally.

De Blasio has embraced the community schools model, which integrates academic, health and social services, and youth and community development, all under one roof. The mayoral hopeful joked he had “basked in the golden sunlight” during his trip to Cincinnati, which has gained national attention for their use of the model.

De Blasio said he would convert 100 existing schools into community schools during his first term and would select those schools based on existing services already integrated into the schools. When asked how he would pay for his proposal, de Blasio said he would rely on some existing resources, such as Medicaid reimbursements for healthcare, as well as volunteers and internships.

“It is not entirely resources neutral, but it is largely resource neutral,” de Blasio said.

Community schools model is not a panacea de Blasio warned. He acknowledged the immense complexity of the education system and vowed to tackle it from all angles.

In October, 2012 while speaking at an Association for a Better New York breakfast, de Blasio said he would raise the city income tax for New Yorkers making over $500,000 from 3.9 percent to 4.3 percent for five years. Despite taking heat from the wealthy who already bear one of the heaviest tax burdens in the country —including current billionaire Mayor Michael Bloomberg— he stuck by his plan.

De Blasio calls the increase “modest,” and says it will generate $530 million per year, which will fund the universal pre-k program, as well as after-school programs for the middle school level.

As mayor, de Blasio cannot just arbitrarily raise taxes; he must get a blessing from Albany and approval from the City Council. De Blasio said Albany has agreed to self-taxes in the past for New York City if they are earmarked for something in particular, and he believes getting approval from the Council would not be an issue.

The City Council will look much different next year than it currently does, with at least 20 seats changing due to term limits or members running for other offices.

“I fundamentally believe the City Council members would agree we need these resources and it is fair to ask those who are wealthy, to do a little more,” de Blasio said.

While $530 million is a lot of money, it would need to be spread to not only cover the cost of the seats, but also the creation of pre-k centers at schools that do not currently have them. De Blasio said there are choices in the capital budget, and he would put more focus on spending more capital dollars into education.

“Something else would not happen as a result, but I would argue that getting education right has such ramifications for the future of the city, that it is the right investment to make,” de Blasio said.

De Blasio countered, saying, “they want that [getting into a charter school] because their local district schools are still not doing a good enough job.”

De Blasio said the charter schools debate, which has focused on co-locating schools, as well as should there be more of them, has strayed from core problem—fixing the public schools that are broken.