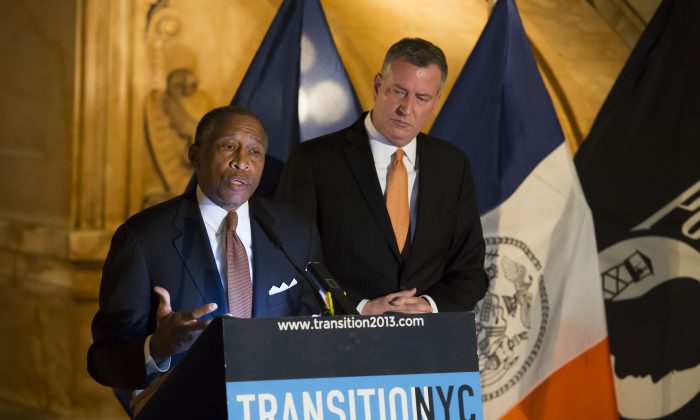 In his career as the U.S. Attorney for the Eastern District of New York, Carter prosecuted dozens of criminals and drug dealers and recovered millions of dollars from insurance fraudsters. He also helped convict Vincent Gigante—one of the biggest Mafia names in New York—on murder and conspiracy charges, including the plot to kill rival John Gotti.

As corporation counsel, Carter will be at the helm of some 700 lawyers working for the city’s Law Department, the nation’s largest. The department represents the city, its elected officials, and its various agencies in lawsuits ranging from routine negligence to key constitutional challenges.

Carter is tasked with handling two of the biggest legal matters facing the incoming administration: stop and frisk and the Central Park Five case.

Carter said that he will drop the city’s appeal to a federal ruling against stop and frisk. The city’s police unions filed an appeal of their own in early November, anticipating the withdrawal once de Blasio takes office.

Carter will also work on settling the claims of the men who were wrongfully convicted in the rape of a jogger in Central park.

In his day-to-day work, Carter will review and approve every bill and executive order before they are signed.

De Blasio picked Carter for his experience and character. The two also share views on building a progressive, diverse, and effective government.

“The first time I met with him, I was convinced on the spot that we had chemistry, the communication, the shared values,” de Blasio said. “My vision for his office, as with all parts of government, is a progressive activist corporation counsel’s office.”

De Blasio said Carter has, like him, worked hard on ending the “tale of two cities” in his personal and professional life. Carter serves as the chairman of the board for Hale House, a Harlem charity that services children and homeless families.

“I try to use the law to level the playing field for those seeking equal access and opportunity,” Carter said.