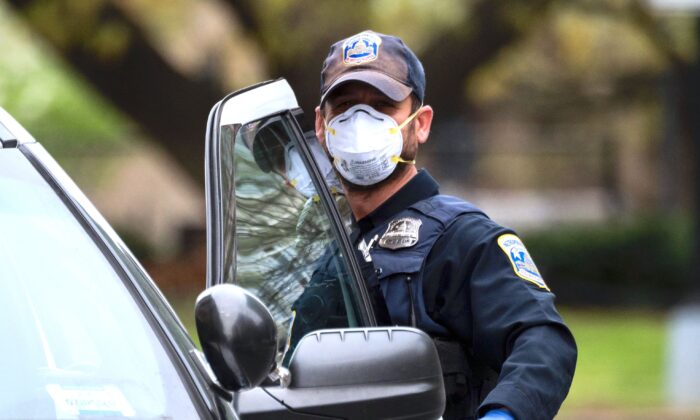 A Metropolitan Police officer wears an N95 mask as he gets into a squad car near the George Washington University hospital in Washington, D.C., on March 31, 2020. (Andrew Caballero-Reynolds/AFP via Getty Images)
Analysis

One quarter of members tested positive for COVID-19 after vaccination, lawsuit says

While Washington, D.C. ticks down on forced COVID-19 vaccination for government employees, the police union has filed a lawsuit to stop the mandates. It is also asking a judge to issue a temporary restraining order to freeze the march toward a Feb. 15 deadline.

According to documents, at least 528 members of the D.C. Police Union, or more than one in six, are unvaccinated; and a larger number are passing up boosters. Also revealed in the union’s legal filing: at least one-quarter of the union force has already tested positive for COVID-19 after getting the COVID-19 vaccine.

Although the Supreme Court determined that the federal government cannot force COVID-19 vaccine mandates on private businesses, many government workers around the country, as well as health care workers, are still subject to the requirements.

Like in other workplaces, the pending requirement in Washington, D.C. has put additional pressure on a workforce already stressed by problems, from worker shortages to “defunding.”

According to local news reporter Jodie Fleischer of News4, the police force is already operating with 200 fewer officers than at the same time last year, prompting “mandatory overtime, and an exhausted workforce.” Union head Gregg Pemberton told Fleischer in December that more than 400 officers had resigned or retired since June 2020, and pointed to police reform bills passed by the city council. “This is approaching catastrophic levels. We’ve never seen the department this small in size,” said Pemberton.

D.C. police will be required to upload their proof of vaccination status and booster to the Human Resources Application Peoplesoft by the Feb. 15 deadline.

According to the instructions issued to the force, the demands are being implemented under the District’s requirement that all government employees “receive a complete course of vaccination against COVID-19, including a booster shot when eligible.”

That is despite the fact that vaccinated people have gotten COVID in large numbers and, according to the Centers for Disease Control (CDC), carry a viral load that is similar to—and spreads COVID as easily as—people who aren’t vaccinated.

The lawsuit filed by the police union points out: “The COVID-19 vaccine has proven to be ineffective at reducing the transmission rate of coronavirus to members of the public or co-workers in the District government, which was the stated basis behind the vaccine mandate.”

According to figures provided by the union, 696 vaccinated D.C. Police Union members, or 25 percent of the union force, have tested positive for Covid-19 after being vaccinated.

“Compelling all remaining District employees to be vaccinated serves no legitimate governmental purpose,” argues the union in the legal filing.

The vaccine mandate also ignores a growing body of scientific evidence that shows people who have been infected with COVID are far better protected from subsequent infection than are people who are vaccinated.

The vaccine mandates also do not allow for people to opt out over concerns about side effects that have been documented with COVID-19 vaccines, including serious heart disorders, blood disorders, and paralysis. The D.C. Police Union court filing states:

“The COVID-19 vaccine is irreversible [and while it] may be safe for some, the CDC explicitly recognizes that certain adverse events after COVID-19 vaccination may occur” including “(1) anaphylaxis (severe allergic reaction); (2) thrombosis with thrombocytopenia syndrome (‘causes blood clots in large blood vessels’); (3) Guillain-Barre Syndrome (nerve damage that can cause ‘muscle weakness and sometimes paralysis’ and for which some people ‘have permanent nerve damage’; (4) myocarditis and pericarditis (inflammation of the heart tissue); and (5) death.”

“Our staffing shortages are pretty bad,” says one Washington, D.C. police officer who has been on the force for many years and is not vaccinated. The officer says there are many others who do not want to get vaccinated for a variety of reasons.

When I asked if most of the officers will go ahead and get the shots if push-comes-to-shove and they risk getting fired, the officer said, “I don’t know.”

He adds that he loves his job but is also unsure what he will do.