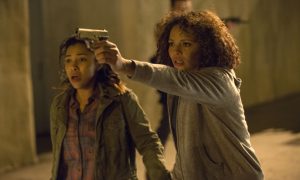 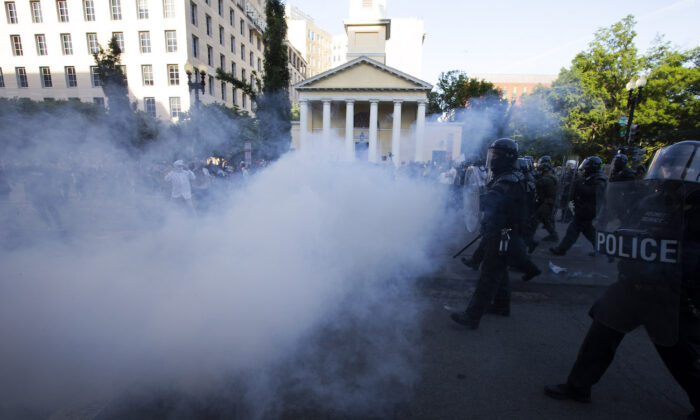 A U.S. Army National Guard officer who witnessed the operation to expand the security perimeter at Lafayette Square in Washington on June 1 will testify in Congress on Tuesday that he thought the tactics used by Park Police to disperse the protesters were “an unnecessary escalation of the use of force.”

Adam DeMarco, a major for D.C. National Guard and Iraq veteran, says he found the use of force used against protesters during the clearing operation “deeply disturbing” and that according to his observation the protesters were “behaving peacefully,” states a prepared written testimony prior to his scheduled appearance before the House Natural Resources Committee. The committee is seeking answers over the Park Police’s handling of protesters during the June 1 incident.

His testimony will challenge many key aspects of the official account put forth by the Trump administration. According to a June 2 Park Police statement, some protesters had become violent at around 6:33 p.m. that day, throwing projectiles such as bricks, frozen water bottles, and caustic liquids.

The Trump administration drew public backlash for the incident, with former Justice Department staff, lawmakers, and other groups calling for Attorney General William Barr’s resignation for his handling of demonstrators protesting against police brutality in the wake of the death of George Floyd. Shortly after the clearing of the square, President Donald Trump and several senior officials walked through the area to St. John’s church, where Trump posed for photos while holding up a copy of the Bible—an apparent response to rioters having previously set the church alight.

Some media reported that the protesters were forcefully removed using tear gas in order to make way for Trump’s visit to the historic church, but Attorney General William Barr has repeatedly denied that the two had any correlation.

In the days leading up to the clearing operation, many of the protests that were peaceful during the day morphed into violence and destruction during the night, with rioters hurling projectiles and setting property ablaze, including the historic St. John’s church. Barr had said the operation was to expand the security perimeter around the White House in response to the rioting.

DeMarco said the operation to clear the protesters began shortly after Barr and Gen. Mark Milley, the chairman of the Joint Chiefs of Staff, appeared on Lafayette Square. At one point, Barr went to speak with Park Police, while Milley walked to an area where DeMarco was standing and told the major to ensure that the National Guard remain calm and to respect the demonstrators’ First Amendment rights.

After the pair left the area, Park Police issued the first of three warnings to direct the protesters to disperse, DeMarco said, adding that the announcement was “barely audible.”

“I saw no indication that the demonstrators were cognizant of the warnings to disperse,” he said, according to this statement (pdf).

Shortly after the warning, Park Police began clearing the protesters. DeMarco said during that he heard explosions and saw smoke being used to disperse the protesters. A Park Police liaison officer told him that the explosions were “stage smoke,” however, the major said that he could feel irritation in his eyes and nose.

“Based on my previous exposure to tear gas in my training at West Point and later in my Army training, I recognized that irritation as effects consistent with CS or ‘tear gas,'” he said, adding that later that day he found tear gas canisters on the street.

During an interview with CBS’ “Face the Nation” on June 7, Barr addressed criticism of the Trump administration’s handling of protesters in Washington. He disputed claims that protesters at the White House were forcefully cleared from the area using tear gas and other means for the purpose of Trump’s church visit.

The Epoch Times reached out to the Justice Department and the U.S. Park Police for comment on the testimony.

The incident has prompted House lawmakers to seek answers regarding the Trump administration’s actions on that day. Barr is scheduled to appear before the House Judiciary Committee on Tuesday.