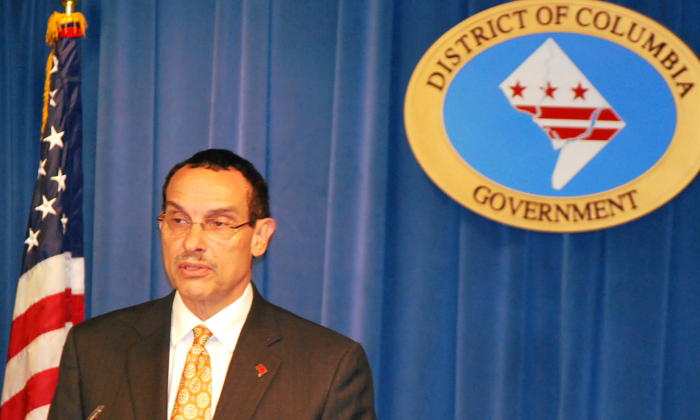 District of Columbia Mayor Vincent Gray announces the Drivers Safety Act which would allow undocumented immigrants in the District to obtain driver's licenses or ID cards. (Ron Dory/ The Epoch Times)
US

WASHINGTON, D.C.—Mayor Vincent Gray announced legislation May 2 that would allow undocumented immigrants residing in the District to obtain driver’s licenses or ID cards from the District of Columbia’s Department of Motor Vehicles.

The bill would legally permit undocumented residents in the District to register and operate a vehicle and apply for auto insurance.

The licenses will not meet federal ID purposes such as entering federal buildings and boarding airplanes; however, the Mayor asserted that it would be an acceptable form of ID in the District.

“This legislation is the right thing to do for our undocumented residents and our entire community,” said Mayor Gray. “This promotes the safe operation of motor vehicles on our streets, and reduces incentives for criminals to sell fake IDs on the black market.”

The District joins an increasing number of states that have passed similar legislation. Illinois, New Mexico and Washington (state), Oregon and Utah already issue driver’s licenses and ID cards to illegal immigrants, according to WUSA9.

On the same day of the Mayor Gray’s announcement, Maryland Governor Martin O’Malley signed a similar law to the mayor’s proposal, extending driving privileges to undocumented residents in Maryland. Oregon Governor John Kitzhaber signed Oregon’s bill into law on May 1.

Mayor Gray expressed a desire to have his bill signed into law by July 15.

The legislation is expected to make life easier for an unknown number of undocumented residents of the District. One such resident, Ms. Rufina Ferrera, shared her excitement over the announcement.

“It would change my life and that of my family,” she said. When Ferrera’s son was deported, he left behind two cars that she and her other son were unable to legally drive. Ferrera, from El Salvador, works in commercial cleaning.

In order to obtain a District driver’s license, undocumented residents must show proof that they’ve resided in the District for at least six months, obtain an individual tax payer identification number from the Internal Revenue Service, and pass written and road examinations. They will also have to submit a valid unexpired passport from their home country or a foreign birth certificate.

If the federal government passes comprehensive immigration reform, such legislation would complement federal legislation that offers immigrants a path to citizenship.

Rev. Mario Dorsonville, Catholic Charities’ Vice President for Mission, Immigrant and Refugee Services, relayed the words of the one of the immigrants he serves.

“He said to me, ‘I have the worst poverty that a human being can have: to be invisible and faceless.’”

Immigration advocates in the District applaud the legislation for supporting undocumented immigrant’s need to drive: to take their children to school, go to work and visit the doctor, and they anticipate that the bill will bring people out of the shadows.