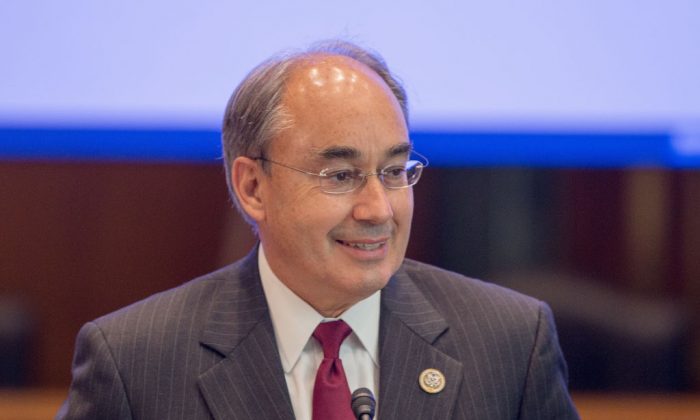 Maine Republicans on June 24 decided that they want former Congressman Bruce Poliquin to once again represent their interests in Washington.

Poliquin, who has the backing of Republican gubernatorial candidate Paul LePage, was a 2019 Trump nominee to the government-run Securities Investment Protection Corporation (SIPC).

With his “Bring Back Bruce” campaign, he garnered 61.5 percent of votes with 26 percent of the ballots counted at 10:39 p.m. ET, according to Decision Desk HQ. He defeated GOP contender Liz Caruso.

Brent Littlefield, Poliquin’s campaign advisor, told The Epoch Times, that the upper echelon of Washington Republicans are already lining up to assure Poliquin takes the important Congressional seat. Rep. Steve Scalise (R-La.) is already scheduled to come to Maine and campaign for Poliquin.

“Bruce has what it takes to take back this critical seat in the fight to Fire Pelosi and Save America!” Stefanik wrote on Twitter.

Poliquin, a former state treasurer in Maine, has twice held the office, looking to take it back from Rep. Jared Golden (D-Maine). Poliquin lost the seat to Golden in 2018 under Maine’s ranked-choice voting, an electoral system that kicks in when no contender receives more than 50 percent of the vote.

Poliquin did not readily accept defeat. He filed a lawsuit challenging the constitutionality of the electoral system, but a federal judge ruled ruled against him, leading Poliquin to eventually concede to the young Democrat and former U.S. Marine.

Poliquin has made bids for other offices including the 2012 race for U.S. Senate in which he won the Republican nomination from Maine voters. When he was elected a second time to U.S. Congress in 2017, Poliquin stood alone as the only Republican representing a U.S. House district in all of New England’s six states.

Poliquin built his wealth off investment management ventures in New York and Chicago. He brings a diverse political and personal background back to the national arena.

An Andover Academy and Harvard graduate, Poliquin grew up in the rural reaches of Waterville, Maine. He suffered the loss of his first wife to a drowning accident in 1992, leaving him a single dad to his then 16-month old son. He divorced his second wife in 2009.

As a congressman, he was intermittently a staunch Republican, supporting tariffs on Chinese imported lumber to help the U.S. wood industry, but ranking among only three House Republicans to vote against repealing Obamacare, a move that led to the Republican Liberty Caucus to rescind its endorsement of him.

Poliquin scored big with veterans when he introduced the Veterans Access to Long Term Care and Health Services Act, which would lead to cutting some of the red tape for nursing home care for veterans. He also aggressively campaigned for reform of malpractice at VA hospitals.

As he was during his first two terms, Poliquin remains committed to support American veterans and stolidly opposed to gun control legislation and open borders, this time, with emphasis that illegal immigration is to blame for the influx of fentanyl in America.

New to his campaign is a call for a parental rights bill to stymie what he called “the extreme elements” of critical race theory. Poliquin hasn’t said much about government-imposed COVID mandates unlike Caruso, who emphatically campaigned on a medical freedom platform.

Unlike Caruso, Poliquin has outwardly condemned Jan. 6 as a “violent event” and while a declared pro-lifer, has refused to say if he supports outlawing abortion. On a recent appearance on “207,” run by News Center Maine, the state’s top TV station, Poliquin repeatedly refused to say if he thought Trump won the last election, only saying that “we have a President I don’t favor.”

Caruso in her concession speech for her bid for Maine’s 2nd Congressional District seat, said she was thankful for the opportunity to get to know more fellow Mainers in her three months on the campaign trail.

Pingree, a longtime incumbent, having been elected in 2009, is being challenged for her seat in Maine’s 1st Congressional District by Republican Ed Thelander, a former Navy seal and volunteer firefighter from Bristol, Maine. Neither had contenders in the primary.

The district includes Maine’s progressive southern seacoast Maine, Maine’s capital of Augusta, and Portland, considered one of the most liberal cities in New England.