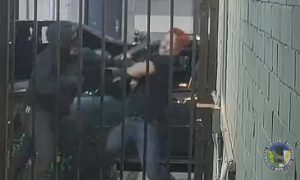 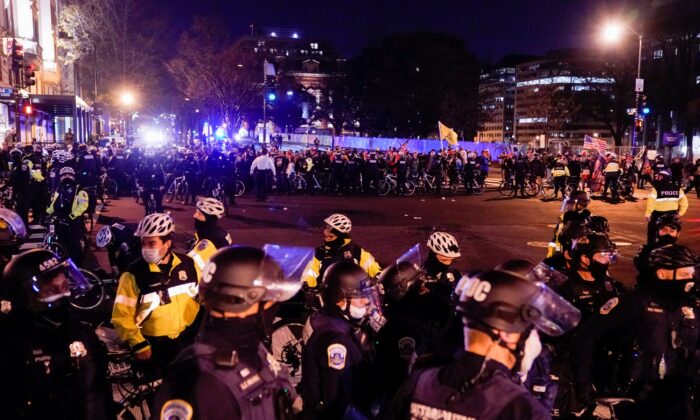 Police officers stand in formation to separate members of the Proud Boys and counter protesters in downtown Washington on Dec. 12, 2020. (Erin Scott/Reuters)
US News

DC Hotel Where Proud Boys Often Stayed Will Be Closed Jan. 4 to 6

Hotel Harrington in Washington, D.C., where the Proud Boys often stayed in the past few months, announced it would be closed during the pro-Trump demonstration planned for next week for the safety of visitors and employees.

The hotel said in a statement posted on Facebook on Monday that the venue will be closed from Jan. 4–6 to all visitors except long-term dwellers. Management said the hotel would organize refunds for all visitors who have made pre-paid reservations.

The hotel announced the closure one day after The Washington Post published a report on how the Proud Boys have assembled at the hotel in the past few months. The report said that several hundred Proud Boys stayed at the hotel for a protest on Dec.12.

“Washington, D.C., has been our home for 106 years and we join with all of our guests, visitors, staff, and neighbors in our concern and desire for everyone’s health and safety,” the hotel said in the statement.

The Post labeled the Proud Boys as a “militant right-wing organization that vigorously supports President Trump” and said the group “has clashed in violent street battles with members of antifascist groups and others who oppose Trump.”

“We greatly appreciate the trust our guests have placed in Hotel Harrington over the years and we wish to continue to earn that trust,” the hotel’s statement continued. “While we cannot control what happens outside of the hotel, we are taking additional steps to protect the safety of our visitors, guests and employees.”

According to the Post, Enrique Tarrio, the leader of the group, said in an interview that members of the group have stayed at the hotel because it’s in downtown D.C. and close to the Trump hotel and the White House.

Tarrio on Dec. 29 said in a Parler post that he never thought in his life that he would be talking to media about which hotel he had decided to stay in.

He said the Post “for some reason believed that one of the many hotels we frequent was newsworthy.” The hotel, therefore, decided to close for 3 days, which has never happened in the history of the hotel since the 1920s.

“They have fallen victim to the fake news. With @TheProudBoys you can see in real time the media machine do the globalists dirty work. The media is the ENEMY of the people,” the leader added.

“Stop the Steal” organizer Ali Alexander, one of the major groups organizing the protest on Jan. 6, said on Twitter that protesters need to sue over the closure of the hotel.

“They want to STOP #StopTheSteal!” he said.