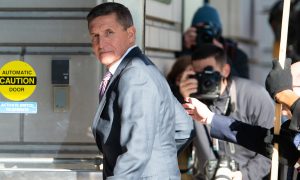 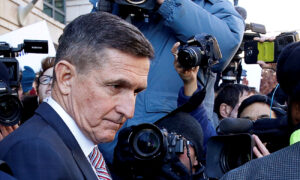 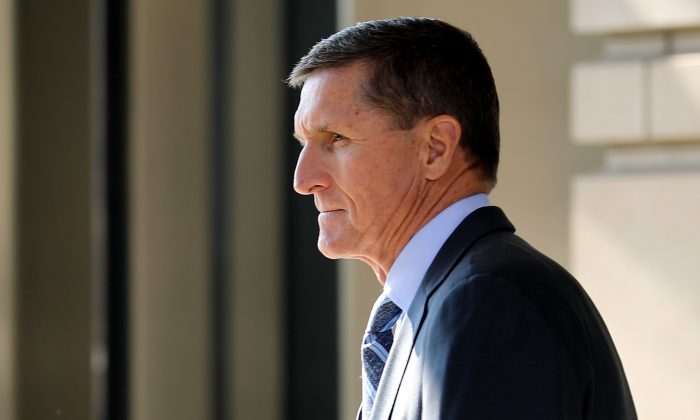 A three-judge panel of the District of Columbia appeals court appeared split on whether to intervene in the case of former Trump adviser Lt. Gen. Michael Flynn.

Flynn and the Department of Justice (DOJ) are asking the appeals court for a writ of mandamus—an order to District Judge Emmet Sullivan, who has presided over the Flynn case—to accept DOJ’s motion to drop the case.

The DOJ moved to drop Flynn’s case on May 7, saying the FBI didn’t have a proper reason to interview Flynn in the first place and appeared to only do so “to elicit those very false statements and thereby criminalize Mr. Flynn.”

Sullivan not only hasn’t accepted the dismissal, but also appointed an amicus curiae (friend of the court) to argue against it. He’s also indicated, through his lawyer, that he wants to probe the DOJ about its motives for dropping the case and consider whether Flynn should be held in contempt of court for withdrawing his plea.

“The unusual developments in this case provide at least a plausible ‘reason to question’ the ‘bona fides’ of the government’s motion,” said Beth Wilkinson, Sullivan’s lawyer, in a June 1 response to the court.

Sidney Powell, Flynn’s attorney and former federal prosecutor, argued at a June 12 teleconference hearing that Sullivan has no authority to delay his decision as it would force Flynn to incur further harm.

She said the judge is free to review the case’s record before ruling, but shouldn’t inquire any further because the Constitution leaves prosecutorial decisions exclusively to the executive branch.

The DOJ, represented by Principal Deputy Solicitor General Jeffrey Wall, agreed, noting that it too would incur harm because Sullivan indicated he will ask about the government’s “deliberative processes” that the executive branch should be allowed to keep to itself.

Sullivan’s lawyer argued that the judge just wants to ask some questions to determine what are the boundaries of his authority to challenge the DOJ’s motion to dismiss the case. He hasn’t yet impermissibly scrutinized the motion and, in any case, “the government certainly knows how to refuse to answer or refuse to provide information if it thinks it’s appropriate.”

Wall said the court should consider the “manner” in which the DOJ would be forced to respond to Sullivan’s questions, raising the concern that “if it isn’t already, it is threatening to become and will become the sort of public spectacle that I think mandamus is warranted to foreclose at this point.”

“You have all these allegations lobbed at the executive branch. We’re going to have to answer them in a public forum, in a politicized environment,” he said, adding, “it invades our deliberative process, it chills law enforcement, it sets up a conflict between branches.”

Henderson seemed unconvinced that it’s necessary for the appeals court to step in now, as there is still a chance that Sullivan will grant the motion and won’t do what he has indicated he’ll do.

The train of Sullivan’s inquiry has “only partially left the station,” he acknowledged, but added that a similar case a few years ago set a precedent that “the train’s never supposed to leave in the first place in order to respect the division of constitutional authorities between the executive and the judiciary.”

Wilkins questioned the idea that the district judge shouldn’t be allowed to probe beyond what the government put in its motion to dismiss. What if the prosecutors acted out of racial bias, he asked, conjuring up a scenario where the DOJ drops a prosecution of a white police officer for “beating” a black person.

Wall reminded the judge that, first of all, the government would need to state such a reason openly. Under normal circumstances, the government is entitled to a “presumption of regularity,” meaning that unless there’s “clear evidence” to the contrary, the judge shouldn’t go about theorizing about the government’s ulterior motives.

Even if the government was to state such a reason openly, the court can disagree, but still has to grant the dismissal, because only the government can bring prosecutions, Wall argued.

Finally, he pointed out that racial bias is a constitutional issue, which goes beyond anything concerned in the Flynn case.

Rao questioned why Sullivan appointed an amicus to argue against the government’s motion to dismiss the case. On whose behalf is the amicus arguing, she asked.

Wilkinson answered that the amicus represents the court, but that the judge is taking advantage of the adversarial position of the amicus to understand “what is the scope of the authority” of the judge in this situation.

Both Powell and Wall pointed out that the amicus, former federal judge John Gleeson, has openly accused the DOJ of dropping the case out of favoritism, de facto leveling accusations against Attorney General William Barr and President Donald Trump.

They argued that the appointment sheds light on where Sullivan is trying to lead his inquiry. Indeed, Gleeson made his views known in a Washington Post op-ed two days before Sullivan appointed him.

Henderson countered that appointing “intemperate” amicus doesn’t necessarily mean Sullivan is going to listen to him.

“For all we know, he will say, ‘this amicus brief is over the top, the dismissal motion is granted,’” she said.

Wilkinson alluded to that notion.

“It may well be that the [lower] court reads both sides, both [sides’] briefings, asks the government questions, and grants the motion to dismiss,” she said.

Even in that case, the appeals court should preemptively bar Sullivan from getting into fishing for evidence and probing the government’s motives, Wall said.

Indeed, Sullivan also tasked Gleeson to argue why Flynn should be forced to defend himself from an accusation of contempt of court.

The judges seemed to mostly elide that issue.

Rao voiced a concern that issuing a partial mandamus would make the judges specify what “precisely is on and off the table” in Sullivan’s situation, which seemed to her “like a lot of law to be making in a mandamus.”

Wall agreed that “the cleaner way to do it” is to just grant the mandamus.

The judges didn’t set a timetable for coming to a decision.