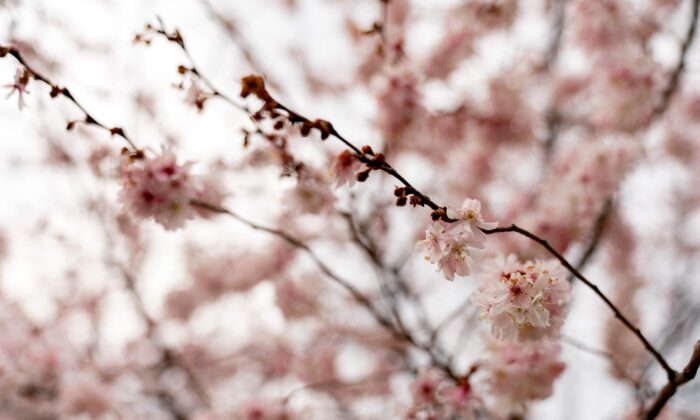 Cherry blossoms are seen near the Washington Monument along the National Mall in Washington on March 6, 2022. (Stefani Reynolds/AFP via Getty Images)
District of Columbia

The National Cherry Blossom Festival is returning with all its pageantry, hailed by organizers as the unofficial start of Washington’s reemergence from the two years of pandemic lockdown.

This year’s cherry blossom trees will reach peak bloom between March 22 and March 25, according to National Park Service (NPS) estimates. The festival kicks off with a March 20 with opening ceremony and runs through April 17, with a full schedule of concerts and events, including a parade on Saturday April 9.

A similar event two years ago was dominated by questions about whether the festival would happen at all in the face of the COVID-19 virus.

Sure enough, within days of that event,  Bowser declared a public health emergency and banned all mass gatherings. Festival organizers spent the month frantically coming up with long-distance ways for residents and visitors to enjoy the annual rite of spring, include a live Bloom Cam and virtual video tours.

Local officials resorted to closing down streets and shuttering Metro stations in order to keep crowds from gathering at the Tidal Basin to observe the pinkish red blooms.

This year marks the 110th anniversary of the original 1912 gift of 3,000 cherry trees from the mayor of Tokyo. The Japanese government remains heavily involved in the festival and regularly replaces about 90 trees per year.

Activities like Petal Porches—where residents are encouraged to decorate their own porches in cherry blossom themes and post the pictures online—will be continued. And the popular Bloom Cam will be back. The March 26 kite flying festival on the grounds of the Washington Monument will take place as usual, but residents will also be encouraged to hold their own smaller kite flying events in featured area parks.

Mike Litterst, NPS spokesman for the National Mall, said the harsh winter weather predicted for this weekend shouldn’t impact the development of the trees.

Temperatures below 27 degrees can damage the blooms—something that happened in 2017, when a late frost killed about half the blossoms. But Litterst said the flowers should be safe from the snow and freezing rain expected this weekend.

“They’re still tightly in their buds. The armor of the buds is protecting the blossoms,” he said. “Another week or so down the road, if this were to happen, we’d have some major concerns. I think we’ll be OK this time.”